A New World for FIRST Robotics Team with CNC

The FIRST Robotics Championship is underway, and that means herds of high schoolers from around the globe and their robots are descending on George R. Brown Convention Center in Houston, Texas. FIRST provides friendly engineering and manufacturing competition for students by pitting their robotic designs against one another in various tasks while also fostering “co-opertition.”

Much like the real world of product design and development, students look to win the competition, but there are a number of benefits to helping their fellow competitors at the same time.

The FIRST Robotics season starts in January and officially culminates this week. Many teams continue to do smaller regional events after the championship to keep their engineering skills honed and push their robots to the limit.

We had a chance to connect with Team 871, also known as Robotechs, out of West Islip, New York, who have been an active team since 2002. They have been using a Tormach PCNC 1100 for a number of years and recently purchased an 1100M to add to their arsenal of tools.

Andy Baranec is their coach (mentor), and he has been with the team for about 16 years. He spoke with us alongside Chris, a Senior who is the team’s systems engineer, and Kaylee, a Sophomore who is on the CAD/mechanical team for the robot. 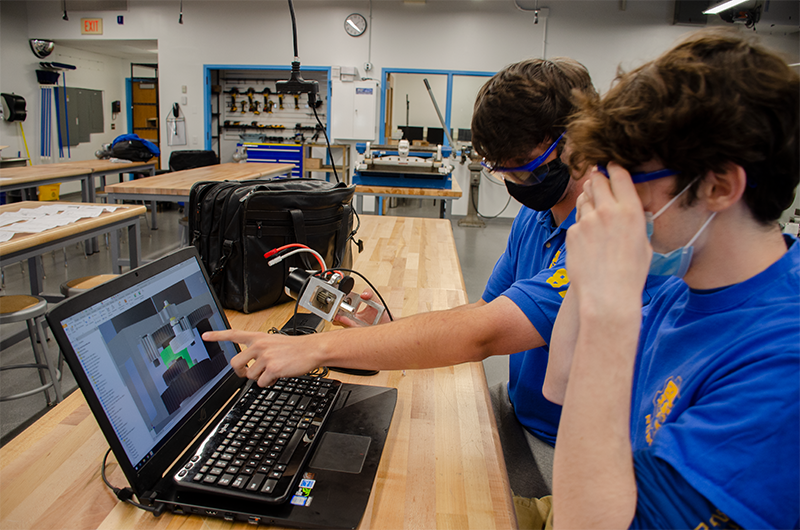 Tormach: Can you tell us about your machines?

Andy: We have an older PCNC 1100 that's been through the ringer a couple of times. It's a high school shop machine, so it's seen some abuse and it keeps on going. And then, we have a brand new 1100M.

T: How did you get involved in your school’s FIRST Robotics team?

Chris: I was introduced to robotics at a younger age, and I knew that there was a robotics team in the high school and I wanted to be a part of it. When I joined the team, I knew very little about robotics and I was super excited to be brought from the ground up. Early on, I was just being taught basics like how to use a tap, how to use a drill properly, what a drill press was, what a bandsaw was, all that basic stuff.

Kaylee: I have always been into technology and engineering. I found my tech classes the most enjoyable when I was in middle school, so when I came to high school and heard of the robotics team, I was like, ‘Oh, I wanna do that.’

T: Can you tell me about some of your experiences with the Tormach machines?

C: One of my first tools to learn was the 1100M. During our lockdown season of 2021, we spent our time building a mock-up swerve drive module. We've always wanted to build a swerve drive robot, but we've never been able to. The skeleton of our first SW drive module was machined completely on the 1100M and the PCNC 1100. All the parts were designed by us - we sourced all the parts, threw them on the machines, generated tool paths, and made 'em real. 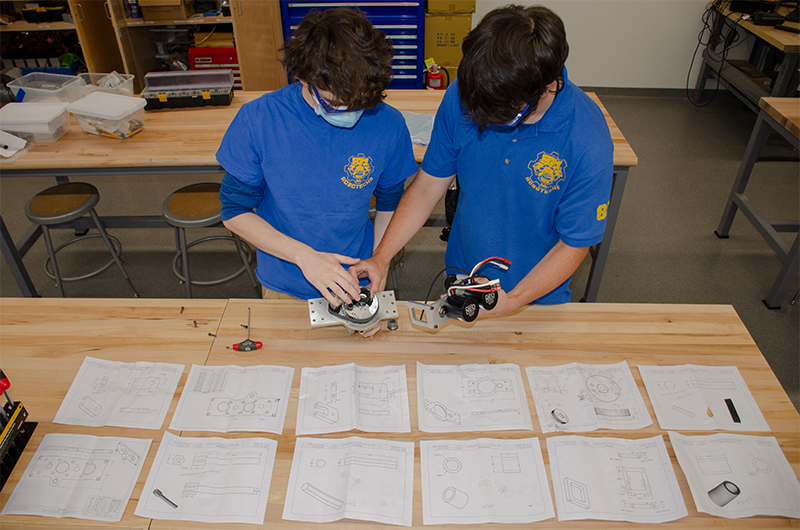 K: The first thing that I made on the CNC by myself was this collector arm for our robot. The first thing I realized was just how precise you have to be when zeroing the machine. I remember zeroing it. And then I always take a ruler and measure from the bottom of the drill to the top of the surface to make sure it matches. But, when I started the machine, I knew something was wrong. We fixed it, but I found zeroing to be the most stressful. If you mess up the Z-axis, then you're just plunging through the material. So that was the first thing that Andy made sure I did right.

C: When I first started on the mill, I didn’t know much about how CNC worked. One of the things that helped me out were all of the online resources. There are tons of forums, tons of pages that have awesome information on what feeds and speeds are, how the CNC machine works, even simple things like how to go from inventor to G-code and things like that.

Our swerve drive really was the project that taught me how to use our 1100. I learned everything from what speeds are too fast to what feeds are good for the end mill that we were using. The coolest part was figuring out how to put this in the machine so that we can zero it and then run the tool path that we want. We ended up breaking some stuff, but overall, we kept it safe and we came out with some awesome finished parts.

A: As a mentor, one of the things that we, and I think a lot of teams used to do, was a very fly by the seat of your pants approach. We'd make a crude prototype out of plywood with a drill. And then we do the best that we could to mark and drill and make a part that mostly worked from the templates. That worked for a while, but there gets to a point of sophistication where you can't be repeatable and you can't reliably produce parts. That's when I really started pushing the team to use the CNC machines.

C: Adding to what Andy said, for parts that require high precision, like motor mounts, a drill press would work, but there might be some inconsistencies in the part. A student might have done a great job, but because of the super high tolerances that our motor has, or our gearbox has, it just doesn't work. That's why we really strive to use the Tormach machines on our projects. Like our collector arm that Kaylee worked on… we needed to make sure that our rivets lined it up. Using the CNC machine, we don’t have to worry about the holes being out of whack. 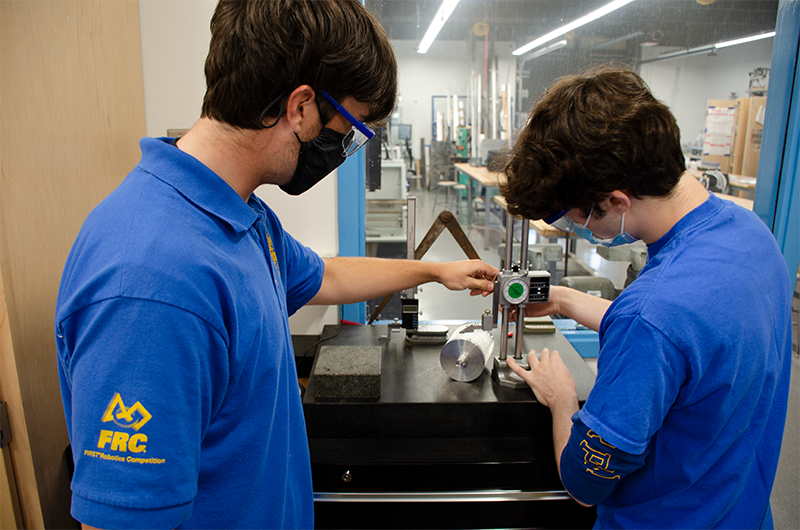 K: Seeing the CNC machine for the first time, it was honestly kind of scary for me. It just looked so huge and complicated. I was like, ‘If they let me use this, I'm going to find a way to break it.’

But then the first time I just watched Chris use it, I actually saw that it's not that complicated. When I realized how simple the process actually was, I found that I really enjoyed it. I also just  love watching the machine cut; it's so smooth and mesmerizing.

For me, it really changed my mindset on how I thought about making and designing parts in CAD and then recreating them in real life.

C: I think the Tormach machines have improved our overall quality of part. The parts that we've been able to make without the Tormachs have been of decent quality and our manual machinists have done a great job with it, but the Tormach really steps it up and we can design and manufacture higher quality parts with higher tolerance with whatever features that we want on it. That has enabled us to build more complicated systems for our robot.

A: We graduated from the minor league to the major leagues in terms of what we could do when we started using the Tormach machines. We could make parts that sort of moved and sort of work well together, and robots that kind-of sort-of functioned. They played the game… ish… to all of a sudden, now we can make these sophisticated mechanisms that we just simply couldn't have before.

Not only have the Tormach machines physically made us better, but since we've hit our stride and realized we can make these parts, it's also given us kind of that kick in the pants to take it to the next level with our CAD. Instead of having a 40% CAD model, we have a 100% CAD model. Everything on this year's robot is in that model. Without that model and without the verification, we couldn't have made the robot work and that all came down to the precision of the machine and the kick in the pants. Basically a whole new world opened up to us that we did not have before.

We look forward to seeing what Chris and Kaylee do in the future as they progress through their tenure as FIRST Robotics competitors and into the world of engineering and manufacturing. Be sure to keep an eye on the FIRST website and social media as the championship progresses.

A Few Need-to-Knows for Simplifying Your CNC Workholding

What to Expect, When You’re Expecting a Tormach Mill