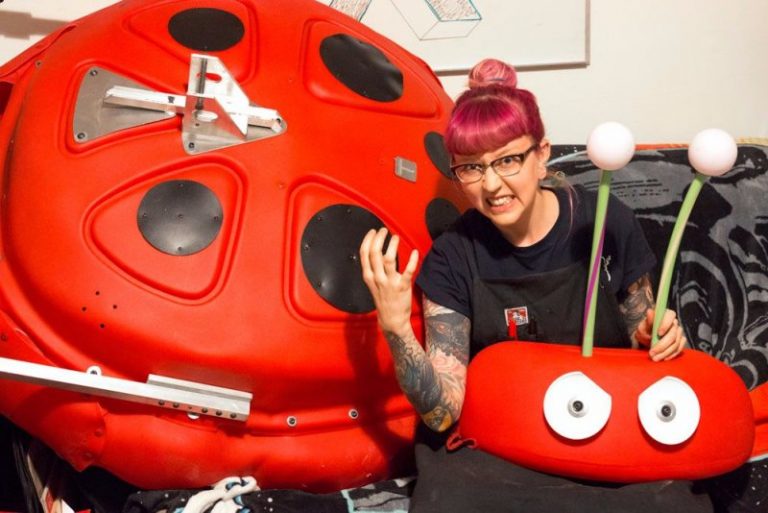 BattleBots Built on an Original Tormach – The World’s Deadliest Ladybug

ABC’s BattleBots pits a horde of 250-pound robots against each other in gear-grinding, fire-spewing combat, but Lisa Winter brings her ladybug doppelganger, Mega Tento, to the match. Created with the help of a Tormach PCNC 1100, Winter’s cutesy robot of doom is more than meets the eye, but this fierce competitor’s story started more than a decade ago.

Winter’s family had a manual milling machine as she was growing up, and she enjoyed the manual components of building. Suprisingly, when her family bought a PCNC 1100 – machine number 118, one of the first PCNC 1100s, built over ten years ago – in 2006, she was a little reluctant. “I was really used to a manual mill that we had, and was sort of upset that we were getting a CNC version,” Winter says. “I really liked doing the hand cranks.” After all, it was with this manual system Winter built her first robot at 11 years old - Tentoumushi – a smaller robotic ladybug – for the original BattleBots in the 1990s. “The original Tentoumushi was 60 pounds, about four feet across, and built in our basement in Wisconsin – basically, with a Dremel and a scroll saw,” she explains. She was even on Jay Leno, showing off Tentoumushi’s capabilities.  “This year, I reinvented an old design and brought back the ladybug. Now it’s the Mega Tento version, at 250 pounds and five feet across. All of the motor mounts and the chassis were all made on the Tormach.” Winter uses a modified sandbox as part of the main body. “The one part that’s not made on the mill is the ladybug portion – it’s a crab-shaped sandbox that I bought at Toys-R-Us – modified to look like a ladybug.” It’s built on a wide chassis that holds the sandbox via a hinged mechanism, allowing it to be lifted up and over opponents. Winter traps her adversaries under the ladybug’s dome, and then proceeds to grind them up via a spinning wheel. “The weapon is a vertical spinner that’s six inches wide, 30 pounds, and made of solid, Grade 50 steel – and it spins at 100 mph,” she explains. Along with the other 40-some BattleBots competitors, Winter spent 10 days in April driving her robot and filming. “Some people think you get to wait a week between fights, like it’s shown on TV, but no, it’s 10 days straight,” she says. The conditions were far from comfortable in the Los Angeles heat, and robots often require repairs or overhauls between matches.

Building a BattleBot can be glorifying, but it has its costs. The competitors don’t get paid to be on the show, and the robots can cost anywhere between $4,000 and $80,000 to create. Plus, almost all the competitors have day-jobs, which means that robotics work is done after they punch out somewhere else. “A lot of people ask, ‘Why do you do this?’” Winter explains. “I think most of us aren’t quite sure. Itcan be a struggle, building and working on the robot after work, but then you get to the event; it’s all of your friends. We’re like family.” After 10 years of use, Winter’s PCNC 1100 is still cutting parts for robotic combat, as well as a few other automaton-related endeavors. This year, after a few upgrades to Series 3 and PathPilot thanks to Santa Cruz Electronics, Mega Tento is ready for robotic battle on season two of BattleBots. Check out BattleBots on ABC, Thursdays at 8 p.m., 7 p.m. central.

All the Cool Kids Are Using CNC ...

Finding Your Work: Edge Finder vs. Digitizing Probe vs. Haimer