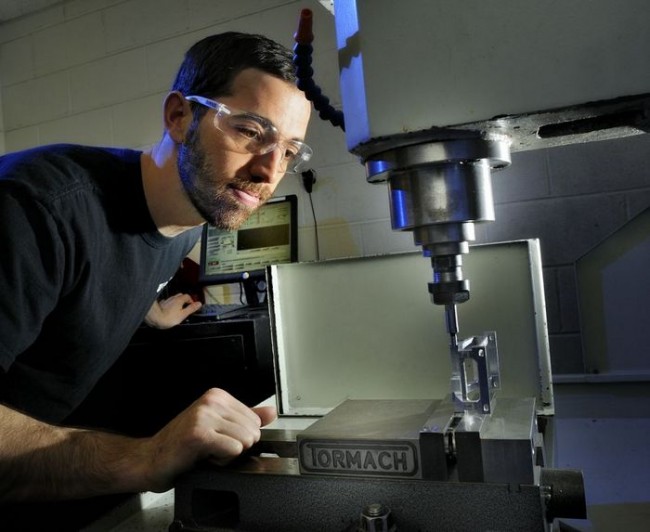 Beyond the Classroom: CNC Rules at Virginia Tech

Derek Lahr is a grad student and senior member of the Robotics & Mechanisms Laboratory (RoMeLa), a facility for graduate and undergraduate robotics research and education at Virginia Tech. Lahr also owns a Tormach PCNC 1100 mill, using it inside and outside the classroom.

"One of my undergrad research projects at Virginia Tech was to make a continuously variable transmission (CVT) for a bicycle. I made a little Lego model and brought it to my advisor Dr. Dennis Hong,” Lahr said. Hong is the Associate Professor and the Director of RoMeLa and was recently described as a U.S. star in humanoid robotics by the Washington Post in this news article.

As Lahr worked on his CVT transmission he encountered a design challenge, “To get continuously variable ratios out of the bicycle transmission, one of the parts in the cam changes shape along its length. I needed a 4-axis CNC with a rotary table to make the prototype. While I was researching ways to solve the problem, I discovered the Tormach mill and saw that it had fourth-axis capabilities, was economically priced, and the right size.”

With a transmission in hand, Lahr needed a bike to put it in. Molding the frame into a single unit, Lahr utilized a monocoque construction technique, using carbon fiber to support the structural load on the bike.

“I basically designed a bike around the transmission. Because I wasn’t a welder and didn’t have a place to weld, carbon fiber was a good alternative material,” he said. Lahr designed two parts for the frame and used the Tormach mill to cut and assemble a clamshell mold with machining wax. Back in the laboratory, Lahr transferred the skills he honed while completing the bicycle project to several robotics projects in the works at RoMeLa—and he took his PCNC mill with him.

“Dr. Hong likes to say he tricked me into letting him keep the mill at his place and I like to say I tricked him into letting me keep my mill in his lab. It’s my personal mill, but we run it at the lab and train people to use it,” Lahr explained. “Right now we have a bunch of different types of robots in the lab, ranging from humanoid to tiny soccer playing robots, to tall three- and six- legged ones. A good portion of the parts have been made on the Tormach mill. One of our robots has about a five-foot long carbon-fiber shell and we’ve cut the Styrofoam form with the Tormach and then bonded it together,” Lahr said.

“We were in Turkey last year and both teams came back as World Champions. Next year the competition is in Mexico City and we have to go back and defend our title and I think there will be a lot more teams showing up with similar robots [to ours] and the competition will be pretty fierce,” Lahr said, “We’re working on a new robot that will stand about as tall as CHARLIE, but weigh twice as much. It has much more powerful actuators that were actually made on the Tormach. It’s a much newer design and there are much more things that could go wrong, but we’ll see how it goes.”

After graduation and RoboCup 2012, Lahr will hold four degrees from Virginia Tech, B.S in Mathematics and B.S., M.S., and PhD in Mechanical Engineering. When asked what his post-graduation plans are for himself and his CNC, he said, “I’d like to get some real-world experience either in an entrepreneurial sense or at a research lab. My lifelong goal is to try and start a company and I’m trying to get research in that area. The Tormach is one of my favorite tools; I’m still pumped I still have it.”

Shifting a Hobby into High Gear