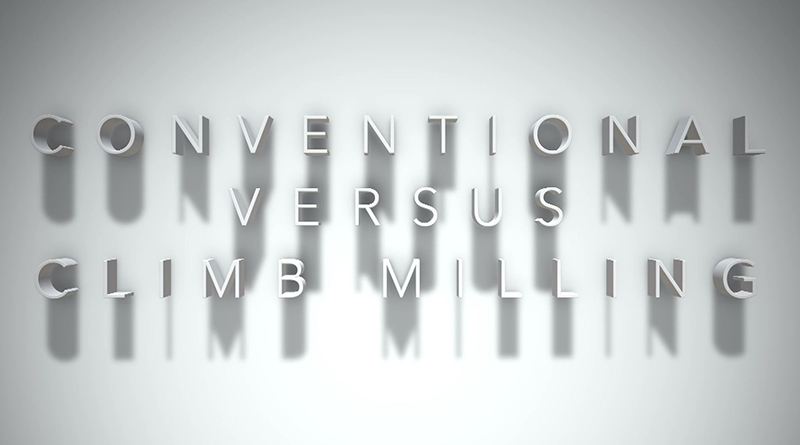 While many CNC’ers have gotten in the habit of always specifying climb milling, there are times to climb mill and there are times where conventional milling is preferred. Before we get into when to use each, let’s look at a quick definition of the differences. First thing to note is terminology.  Some will say “Climb milling versus conventional milling” while others say “Down milling versus up milling.” They’re one and the same:

Climb milling is when the direction of cut and rotation of the cutter combine to try to “suck” the mill up over (hence it’s called “climb” milling) or away from the work. It produces the best surface finish. Here is a diagram showing climb versus conventional milling for a number of orientations:

Arrows show workpiece motion, not spindle motion! Keep in mind that for this illustration, it is the workpiece that moves, not the spindle. On some machines, like a gantry router, the spindle moves, so the labels would reverse. I keep it straight by thinking of the spindle as a pinch roller that can either help move the workpiece in the direction it was already going (climb milling), or that might fight that movement (standard or conventional milling). Try the experiment on your mill of cutting both ways and you’ll see that climb milling is a lot smoother and produces a better surface finish (most of the time; there are times when conventional gives a better finish — see below). Note that depending on which way you are milling, you will need to make sure your workpiece is supported well in that direction.

Advantages and Disadvantages of Up Milling and Down Milling (Conventional vs. Climb)

Advantages of conventional milling (up milling):

Advantages of climb milling (down milling):

There is a problem with climb milling, which is that it can get into trouble with backlash if cutter forces are great enough. The issue is that the table will tend to be pulled into the cutter when climb milling. If there is any backlash, this allows leeway for the pulling in the amount of the backlash. If there is enough backlash, and the cutter is operating at capacity, this can lead to breakage and potential injury from flying shrapnel. For this reason, many shops simply prohibit climb milling on any manual machines that have backlash. Some machines are even equipped with a “backlash eliminator” whose primary purpose is to enable climb milling and its advantages. One way to think of it is to consider the concept of chip load. This is a measure of how much material each tooth of the endmill is trying to cut. Typical values for finish work would be 0.001 to 0.002 inch per tooth. For roughing work, that might increase to 0.005 inch. Now, in the worst case, climb milling may grab the table and slam the work into the cutter by the full amount of backlash during the instant when a single tooth is cutting. You can therefore add the backlash to the chip load to see what your new effective chip load might be in this worst case. Suppose you are roughing 0.005 inch per tooth and have 0.003 inch backlash. In the worst case, your chip load will soar to 0.008 inch. That’s probably not the end of the world, but it is a strain. Now suppose you have an older machine with 0.020 inch of backlash and are running a 0.005 inch chip load. If the worst happens there, your chip load will soar to 0.025 inch, which is probably going to break the endmill and is very dangerous. The second thing to consider is whether cutting forces are strong enough to pull the table through the backlash in the first place. A lot will depend on the exact cutting scenario together with your machine. If you’ve got a fancy low-friction linear way machine, it can grab easily. If you’ve got a lot of iron in the table, and maybe you’re running with the gibs tightened a bit, it’ll be harder. There are ways to calculate the cutter force, but in general, smaller end mills, less depth of cut, lower feeds, and lower spindle speed will all reduce the cutting force and make it less likely the cutter will drag the backlash out of your table and create a problem. In general, CNC machines shouldn’t have any noticeable backlash, so these are more for manual machines.

So far, you’ve probably gotten the idea that maybe you should always climb mill. After all, it leaves a better surface finish, requires less energy, and is less likely to deflect the cutter. Conversely, manual machinists are often taught never to climb mill because it’s dangerous to do on a machine that has backlash. The truth is somewhere in the middle. AB Tools, makers of the popular Aluma-Hogs and Shear-Hog cutters, point out some worthwhile rules of thumb:

The reason is that cutter geometry forces the equivalent of negative rake cutting for those heavy 3/4 to 1x diameter cuts. It seems that Dapra Corporation first discussed this phenomenon way back in 1971. G-Wizard now reminds you with a little hint which one you should use:

G-Wizard’s hints tell you what to do: “Use Climb Milling.” If you’ve never played with our G-Wizard Speeds and Feeds software, take a moment right now to sign up for the 30-day trial.

Tool Deflection and Cut Accuracy in Climb vs. Conventional Milling

How does climb versus conventional milling affect tool deflection and accuracy? The following illustration contains small arrows (often called vectors) showing the direction of tool deflection as the cutter moves along the toolpath: 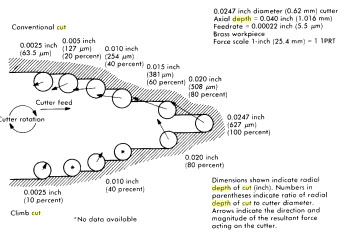 The arrows show where the cutting force is attempting to deflect the cutter.

Conventional cut at top, climb cut at bottom. Note how the deflection force vector is more nearly parallel to the cut with conventional milling (albeit the arrows are longer, showing there are higher cutting forces). With climb milling, the arrow is nearly perpendicular to the cut. If your cutter deflects 0.001 inch, wouldn’t you prefer it to be nearly in the direction of travel? The alternative is for the cutter to plow deeper into the wall or pull away from the wall. Either case will introduce more error in the part being machined. The counterpoint is that the lengths of the vectors are longer when conventional milling. That’s telling you that the cutting forces are heavier and the tool is more likely to deflect. Try climb for roughing, because you can rough faster and the tool deflection effects on accuracy don’t matter – the finish pass will deliver the accuracy. You can rough faster because cutting forces are lighter and the thick-to-thin chip profile carries the heat away on the chip. That thick-to-thin + carrying the heat away is particularly crucial for tough work-hardening materials like stainless. It also results in a nicer surface finish if you can afford to climb for the finish pass.

This one is counterintuitive for a lot of machinists who were trained for most of their careers that climb produces a better finish than conventional. All other things being equal, that’s true, but all other things are seldom equal! The problem is that deflection affects surface finish, too. If the vector is nearly parallel to the path, you can consider that the portion of the vector that pushes it “off parallel” is very small. Therefore, the tool will have little tendency to deflect and put waves on the wall you’re finishing. Note that this may be particularly important in thin wall work where the walls are weak! Therefore, you should switch to conventional milling for the finish pass if you’re at all deflection challenged (use G-Wizard to see if your tool diameter and stickout result in small enough deflection for your finish pass). At the very least, avoid too much depth of cut when climb milling lest it invite deflection. The same article suggests that when deflection is to be minimized, use no more than 30 percent of the diameter of the cutter for conventional milling and 5 percent for climb milling. Of course, here again, if you have G-Wizard, you’ll know what kind of deflection to expect and whether it’s a worry. Climbing to rough and conventional to finish is inline with the consensus over at Practical Machinist as well. Properly managing deflection can help you avoid the need for an extra spring cut, which saves time and money.

For all the same reasons, but considering deflection is much worse micro-milling, you should use conventional over climb milling most of the time when micro-milling. Check out our Micromachining page for more information. This post originally appeared on the CNC Cookbook blog.

Connecting PathPilot to the Internet

Why an Automated Bandsaw Will Save You Money