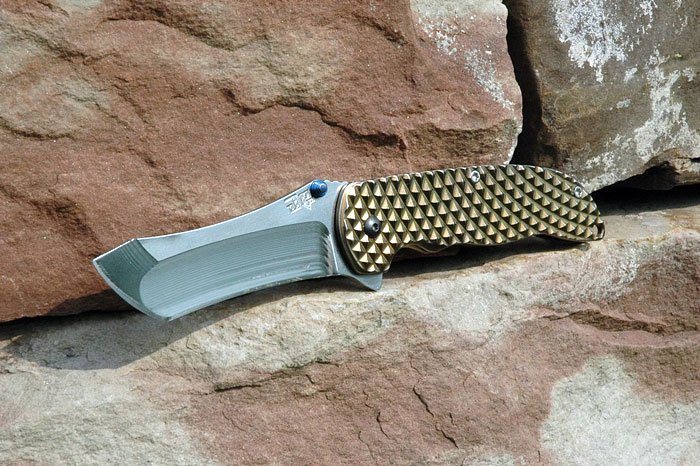 Known best for the instructional videos he publishes to YouTube, Grimsmo has fans from around the world, “A lot of machinists subscribe to my channel because it’s a fun thing to watch. And I have a lot of knife guys that watch it to see what I’m making and also just out of curiosity to see how things work. They’re probably never going to machine anything, but they just like to watch it. It’s like watching that show, How It’s Made.” Only nine months into his knifemaking endeavor, Grimsmo initially published YouTube videos to gather customer feedback. “I find You Tube suits me; I can just turn on the camera and start talking,” he explained. “I can display a new color or pattern and see the interest based off of the comments. A lot of guys will send me a message and say, ‘I just saw your video. Give me one of those.’” Partnering with Tormach to sponsor his popular Knifemaking Tuesday series, Grimsmo has brought a PCNC 1100 into his home machine shop. Assisted by his brother and business partner, Erik, the two Grimsmo’s will be documenting their experience digitally over the next year. “Having the Tormach is going to transform the way I do everything. I’m struggling with my current machine to actually produce a part that actually looks good and works well, because it keeps breaking on me and I have to spend probably 1/3 of my time fixing the machine as opposed to being productive,” he said. I’ve known about Tormach for years. I came across the company on the CNC Forum and Digital Machinist Magazine. About a month ago Andy Grevstad [Senior Applications Engineer at Tormach] sent me a You Tube message said very plainly, ‘I love your videos, I love what you’re doing, and I’d love to talk to you about collaborating.” Ramping up production and allowing for product innovation, Grimsmo continued, “I’ve already got a huge fixture designed so I can take up every square inch of that Tormach and squeeze as many handles or knives into there as I can—which is going to be enormous. Just to give you a number, right now I can barely do three pairs of handles at a time and on the Tormach I can comfortably do nine pairs.” Describing his favorite part of the job as the design process, Grimsmo explains his passion for innovation and pushing himself and the limits of his machinery, “I enjoy the design process, and especially the CAD work and getting everything to fit right and look right. Other guys design more by hand—they see the idea in their head—but I tend to start drawing on the computer and keep tweaking until it looks perfect. I may have a scrap of an idea in my head, but once I see it on the computer, I go ‘yeah, I like that.’ And then I need to make the first prototype, which is designing the fixture, designing in CAM, writing all the code, picking all the tools, and all that stuff. And then it’s cutting the first prototype and all the problems that ensue in that process, and that’s kind of fun.” Grimsmo added, “Things are always going to change and going to be improved upon. As perfect as I can make something, next month I’ll learn a new trick and make it better.”