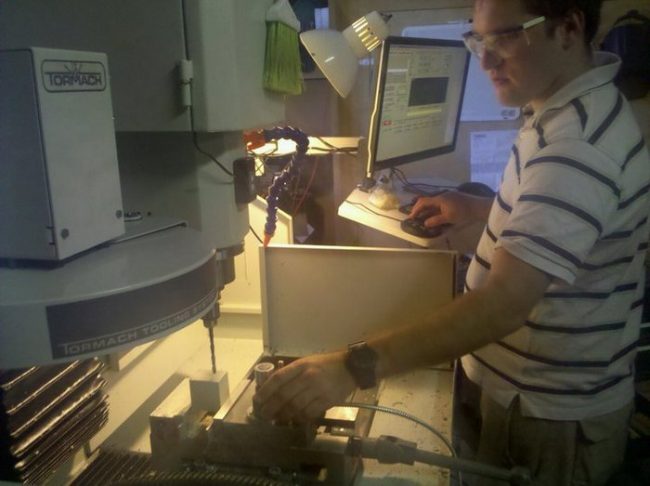 Owner of a Tormach PCNC 1100 with an ATC and 4th Axis, Crenshaw has been working on a research project for a single customer—the United States Fish and Wildlife Service. “We are building a small electronic mesh networking radio tag for sea otter flippers. The tag will be solar powered and store its energy in a capacitor. Otters like to hang out in groups sleeping in the kelp with their flippers held up towards the sun so we're going to take advantage of that behavior and monitor otter behavior wirelessly. It is a small epoxied part so we need to machine molds to hold the electronics during potting and give the tag its shape.” The long-term goal of the flipper tag project is to create a database of animal behavior using the solar- powered networking radio tags to collect data. “The radio tags will provide an unparalleled data collection and delivery system that let us better understand the world we live in,” Crenshaw explained. In creating design prototypes, Desert Star Systems identified a need to be flexible and prove concepts with a short turnaround time. Crenshaw said, “After making 3D concept models and getting them 3D printed, we used the PCNC 1100 to machine aluminum molds used to cast epoxy over electronics. Having the Tormach made this much easier because we could try various ideas without having to go to a machinist. The customer was very impressed with our responsiveness to design change recommendations. Between 3D printing and milling, our prototyping process is very quick. Ultimately it will enable us to deliver a product that the sea otter is comfortable having on its flipper.” The PCNC 1100 also helped Desert Star Systems keep their budget under control. Identifying costs associated with complex-shaped molds, Crenshaw added, “The main design challenge for this project was the cost of machined molds. We have a good process for cylindrical epoxied electronic components, but more complex shapes need different molds. Making silicone molds from 3D printed parts was another option, but attaching the electronics to the mold prior to potting is a hassle to get consistent. Having an aluminum mold was ideal, but the cost of multiple iterations without a mill of our own would have really cut into the budget.” With the mold problem solved, Crenshaw was able solve other design issues like making the tag smaller and changing its shape to one scientists believed would be best tolerated by the otters. “As we moved into the tagging of otters with our prototypes, we anticipate slight-but important-modifications to the design. With the Tormach, we will be able to quickly implement based on the feedback we receive.” After completing the otter flipper tag project for the United States Fish and Wildlife Service, Desert Star Systems will machine base stations for monitoring the behavior of the otters. “Our overall goal is to keep the electronics safe and figure out the mechanics of the data collection,” Crenshaw said. Until then, follow the project on the Desert Star Systems website. You can also see what Crenshaw is creating at his personal blog, Weltopia.com.