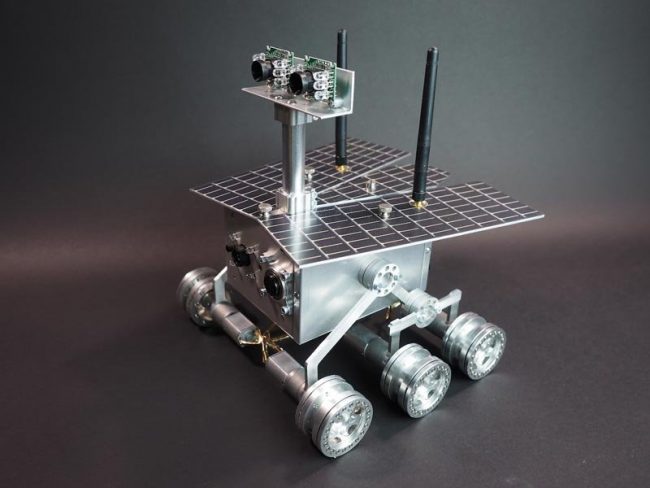 Robotics is hard, especially when you want to build something new and have to rely on outside shops or vendors for components.

Robert Beatty and his two daughters, Camille and Genevieve, decided to take on the challenge of building robots on a whim of inspiration. Robert says, “It started a few years ago when my oldest daughter was about 11. She was getting curious about things around the house and started taking them apart. She’d take apart things like remotes, phones, and calculators and bring them to me in a pile, and say ‘Dad, what’s this thing in here do?’” With experience in software development, Beatty was sometimes able to answer his kids’ questions, and sometimes not. “So, we’d go to Google and start exploring. I suggested that instead of taking things apart, we could start building things. I was thinking of something like a kit – like an LED lighting up – because I didn’t know much about that at the time,” he explains. “Camille immediately said, ‘I want to build a robot.’ That seemed a bit daunting, but I said we’ll see what we can do. It’ll take a while, but we’ll see what we can learn.” The Beatty clan stumbled upon Sparkfun.com, and immediately became immersed in the Maker Movement as self-taught Makers. “When we started out, we didn’t know how to solder, didn’t know what common ground meant, didn’t know anything about Arduinos or machining or tools. The only thing that I had coming into it was that I was a software developer in my previous, corporate life.” The three of them started building simple robots and graduated to designing more complex configurations. Beatty says, “As soon as we got one done, we’d build another one.” The Beatty’s built a website to show off their creations to friends and family, but the world took interest. Since then, they’ve produced mini Mars rover replicas for various museums, including the New York Hall of Science and the Discovery Centre in Kuala Lumpur City Centre, and been invited to the White House (http://beatty-robotics.com/beatty-robotics-at-the-white-house/). As the robots became more complex, Beatty looked into CNC machining when hand tools were no longer providing the precision and consistency needed. “We cobbled together our own CNC by buying stepper motors, and Z axes, and built our own computer. We basically built our own homemade CNC.” The needs of the three makers quickly outgrew their homemade machine, Beatty explains, “In particular, we wanted to be able to change tools rapidly. Our homemade CNC is was just a collet with wrenches - it was a pain to have to change tools. So much so that we tried to design parts and our operations such that we didn’t have to change a tool.” They use a full array of 20 different tools for their robots. “With the Tormach, we have the pneumatic ability to quickly change tools with the Power Drawbar (PN 31706).” Being new to machining of this type, Beatty liked the availability of Tormach’s components and resources. “I liked the fact that it was a turnkey solution – tools, software, mill, controller – showed me that the company had a full breadth of capability and understanding of what was required.” When building their robots, the girls use a combination of parts that they buy, parts that they hack out of other things, and parts that they design and fabricate on the Tormach, so customization is a big element of their design process – and they started with their PCNC 1100. Their custom-made enclosure was designed around a specific vise. “We almost bought the Tormach enclosure, but we wanted a particular vise. It was quite a large vise and it is bolted to the table semi-permanently, so we wanted the enclosure to wrap around it,” Beatty explains. Their enclosure design led to further customization with the electronics on the front of the enclosure and bracketing elements for various tools and the jog shuttle. One of the first robots that they did on the Tormach is the Metalbot, a unibody design that made full use of the PCNC 1100’s Z-axis. Because of the unibody design, the part had features on every side, requiring the Beattys to clamp the part in eight different orientations. Beyond the extended capabilities of a more robust mill, the Beattys have also seen a major improvement in higher-quality concentricity with their custom wheel hubs since getting the Tormach. “We often run into a situation where we have wheels that we want to use, but they don’t fit onto the motor that we want to use. With the Tormach, we are able to design a custom hub to adapt any wheel to any motor shaft,” Beatty explains. “The Tormach did a beautiful job on the hub. If it’s not concentric the wheel just wobbles and doesn’t work.” Beatty credits the success of Camille and Genevieve’s robots to doing hands-on work with the design and fabrication. “I guide the process. Sometime I learn offline and teach it to them as we go, but they’re doing all the work,” Beatty explains. “When it came to the Tormach, we set it up together, we customized it together, learned about it together, and now when we run parts, they do all the fixturing and running of the machine.” Now the girls have an intern who had surpassed the robotics classes in the local high school, and they are preparing another rover robot for the New York Hall of Science.