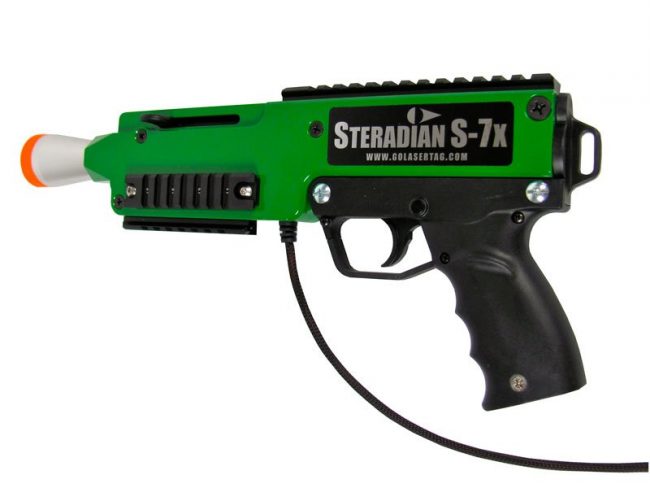 Game On! Small CNC Brings Laser Tag into the Light

Playing laser tag for the past seventeen years, Tom Baker of Lafayette, Indiana has turned a teenage hobby into a successful business—all while innovating the future of the game.

Baker recalled, “I started playing laser tag with Alex Moon in the late 90s. We’d been playing with a local club from Purdue using some department store equipment that eventually wasn’t sold anymore. So we began developing our own stuff, at which point people around us said, ‘Hey, can we get some of that?’”

And a business was born. Moon and Baker are co-owners of Steradian Tech and have combined their skills to manufacture the next generation of indoor and outdoor laser tag guns and equipment.

“Alex focuses on all the firmware design all the embedded circuitry. And I focus on the hardware and all the analog electronics. We built the company from the ground up,” Baker said.

Appealing to the video game generation, outdoor laser tag has enjoyed rapid growth and taken market share from the paintball industry in recent years. Baker explained, “Paintball is on its way down in a hurry. The industry is losing about 20% market share a year and one of the main reasons is the high cost of insurance. Parents’ views on kids getting hit with projectiles are rightly justified. Paintball has had its heyday and laser tag is an exploding market segment.”

“One of the strong innovations in this industry was to be able to make a laser tag system that works well in the sunlight, so that the game can be played outdoors,” Baker said. “In many aspects we were one of the first outdoor laser tag companies out there making the guns and equipment. We use a lot of sophisticated electronics and proprietary designs in order to make the system work, but the end result is that laser tag businesses don’t need to have an indoor location with a dark room anymore.”

Steradian Tech’s laser tag system uses sensors able to detect infrared beams in daylight and send the electrical signal to a circuit worn by each player.

Baker explained, “There’s a circuit in the back of the headband that does all the decoding and sends all the digital data down to the gun, which handles all the digital side of things. We have a pretty powerful microprocessor on board that runs the whole gig. Our new X-Series is a lot like a video game console. Like the Xbox console, you can plug a unique game into the system. So you have one set of hardware that can run these different games that are downloaded into the gun over RF.” Steradian Tech’s customers are primarily businesses in the birthday party and equipment rental industries.

“The equipment goes through hell and it absolutely has to withstand all sorts of punishment. In a rental environment people don’t care. It’s not their equipment, so why should they?” Baker said. After contracting with a machine shop for several years, Baker purchased a Series I PCNC 1100 from Tormach in early 2007 with the intention of using it as a prototyping machine.

“In our first several years, we had a lot of issues with out-of-house manufacturing not paying attention to the level of detail we need for our design tolerances,” he recalled. “One day I stopped and said, ‘What would this really get us if we did production on the Tormach instead?’ Including the labor costs for someone to sit there and do nothing but babysit the machine, we were able to save about $90/body in production costs out of a body that was costing us initially $136. And by moving the production in house, were able to focus on all the tolerances we really cared about and significantly increase our production quality.” Now the PCNC 1100 is an integral part of daily business at Steradian Tech.

“We use the PCNC 1100 in a lot of different capacities here, but the primary hours on it go into milling the bodies for the S7-X, which is our competition laser tag gun that is all done with 6061-T6 aircraft-grade aluminum,” Baker said.

Baker continued, “When I first discovered the PCNC 1100, I was looking around for machines and considered a number of different companies at the time. I have to say what drew me to Tormach was the technical engineering aspect of the company, including the white papers and the fact that Tormach employees are obviously engineers. Tormach researches and understands what they are doing and incorporates the whole concept of PCNC into the design of the machine.”

He continued, “The PCNC 1100 also really expands our ability to develop new products. We have a new product on the block right now and it’s a fairly sophisticated design with a lot of different layers and a lot of different milling. Being fluent in how to use the machine and comfortable in the knowledge that we can make we want on it, I’m able to turn around and say, ‘Okay, how can we design this next product just out of raw materials that make it truly unique?’ And that’s really changed how we develop our products because now we can make exactly what we want, how we want it, without compromise. And it ends up being cheaper than we could buy outright and modify.”

In addition to their burgeoning laser tag business, Steradian Tech is also available for business incubation and contract machining, where the PCNC 1100 is used for prototyping electronic enclosures and packaging, “We do a lot of contract engineering for companies who just don’t know how to get off the ground. One of the things that the Tormach really shines on is helping people fully bring a product to market. We tell them we can develop the circuit board and make the product work but when we ask them what they are going to house it in more often than not, they have no idea,” Baker added. “And so we’ve used the Tormach on small production runs, drawing up plans for mechanical engineering as well as the electrical engineering. Being able to crank out finished products on the PCNC 1100 makes in a complete process works very well for us and fits right in.”