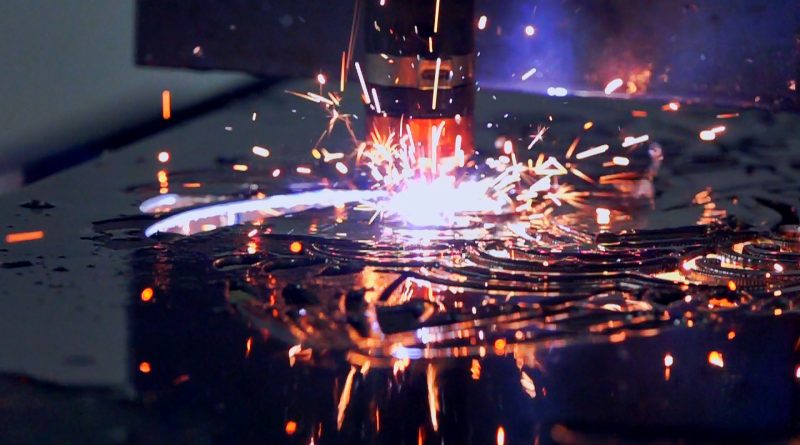 Getting ROI from a 1300PL Plasma Table: Selling Your Own Product

If you’re looking to buy anything for your business, one of the most important things to consider is what your return on investment (ROI) will be, or arguably more important, how long it will take to pay things off.

Cory Bailey used his 1300PL to start a business and create his own products.

He’s a snowmobiler and realized that his like-minded riders would be interested in knowing exactly how much snow has fallen. “Every winter we have a yard stick at the cabin to see how much snow we got the day before. I thought, ‘Hey, why not make a neat snow gauge, everyone has a yardstick, I bet people would like one with a snowmobile.’ So when I came back from up North that Sunday, I sat down and opened Solidworks and started drawing.”

When Bailey was choosing how to make his snow gauges, he saw two options, either plasma or a fiber laser. Since a fiber laser was extremely expensive, the decision was simple.

But then he needed to choose which plasma table would make his new business endeavor succeed. While there are a number of plasma cutting options out there, Bailey was looking to stay on a smaller budget, since his product is seasonal and for a niche group of customers.

“Initially, this was the only product I had, so I had to keep costs down until I could grow the business to other products,” he explains.

Bailey chose to get a 1300PL Plasma Table for the core of his business. His decision hinged on three factors; price, quality, and control system.

Since his business was just getting started, he needed to keep costs down. In his mind the 1300PL had the most bang for the buck in his budget. “I could have bought a bigger machine and been in debt at the outset of my business. With the 1300PL, I’ve almost paid myself back for the machine already.”

While his budget wasn’t massive, Bailey did need to have decent cut quality with his parts. The snow gauges are essentially art pieces, so precision wasn’t as important but the ability to keep finishing to a minimum was. “The cut quality is so good, I only need to run them across a belt sander a couple times and they are ready for paint.”

The last, and arguably most important, part of his decision on the Tormach 1300PL was how the machine was controlled. “I’ve used other plasmas that don’t run on PathPilot, and it can’t be compared. Even the more expensive plasma tables don’t have a controller that is as easy as PathPilot.”

Bailey already owned a Tormach mill and lathe, so his learning curve was minimal with PathPilot, and he found himself making parts as soon as the machine was set up.

When you are calculating the ROI on a machine you need to consider more than just buying the machine. Much like a mill or lathe, there are continual costs to running a plasma table that need to be taken into account when calculating the success of your business.

At the moment, Bailey’s business is season, so his costs month over month vary. That’s why he calculated his ROI based on annual costs.

Total Annual Profit $41,525 over a 7-month winter in Wisconsin (Sept-March)

That means that Bailey was able to make roughly $5,900 per month with his 1300PL. The 1300PL Standard Package, which includes everything needed to get started cutting, rings in at about $20,000 delivered to your door.

Calculating everything out, that means that Bailey was able to pay off his 1300PL in less than four months of making and selling snow gauges!

Anyone who has run a plasma table in production before will tell you that consumables are the biggest ongoing cost.

So far, Bailey has been pleasantly surprised by the consumable life of the Hypertherm plasma system integrated with the 1300PL. “I’ve used a mixture of FineCut and standard consumables so far, and have been getting great longevity out of them. My signs are incredibly intricate, which means lots of linear feet of cutting per sheet of metal.”

Bailey’s last production run was almost a linear mile of cutting and he used eight sets of nozzles and electrodes while cutting 1500 lbs of steel sheet.

Of course consumable life depends on the material you’re cutting, but Bailey’s experience gives a glimpse at how economical plasma cutting can be on the 1300PL.

Now, the calculations above are based strictly on money in-money out. But at the end of the day, we need to value our time at the machine as well. Afterall, that’s why many of us have and use CNC machines - they do the cutting while we can do other things in the shop.

Bailey explains that “my total setup time is maybe five or ten minutes. Because I use the entire work envelope, I know where to put the piece of steel. After you do a couple it's very easy to know where to put the next one, and with the Dry Run function in PathPilot, it's quick to check that you're right. The Dry Run button lets me run the program without the torch on, I use this to validate the G-Code file and my setup. Next I turn the dry run off, and hit cycle start and watch the sparks fly.”

Using PathPilot Hub Bailey was able to take the DXF file exported from Solidworks and transfer the file directly to the machine. “PathPilot has conversational programming which is another reason I choose the 1300PL. With DXF to G-Code I was able to easily select the order I wanted the lines cut, then post it directly to the machine. PathPilot did all the work needed to create the G-Code file and automatically load it so you are ready to start cutting.”

That means that Bailey has spent roughly 170 hours at his machine over the 7-month season of selling his snow gauges, which calculates out to:

Next year he won’t have to factor in the cost of buying the machine, which means more take home and an even better hourly wage for himself.

The return on investment for a Tormach 1300PL Plasma Table is clear. With the right business positioning, it takes almost no time at all to pay yourself back for the machine and start making some real money.

Check out another 1300PL user, at Stuff Made Here, making some crazy things on his plasma table:

How to Use PathPilot HUB

10 Years of Tormach at NYC CNC