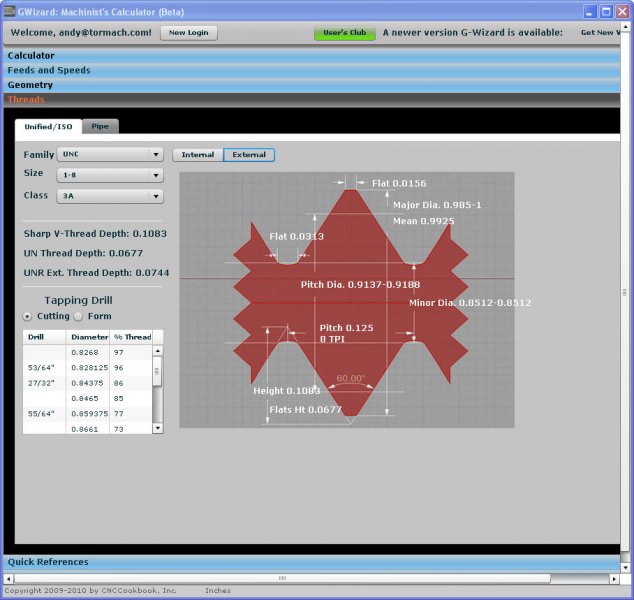 Getting Started with Thread Milling

(New dates scheduled out to March 2011, by the way). Its been universally popular - there is just something kind of mesmerizing about watching the cutter go round-and-round. So we decided to film it and talk about it as the second installment of our new cutting video series (The first one is here, if you missed it). Thread Milling is a great example of something that can only be done with CNC, and its a breeze to program on either the PCNC 1100 or PCNC 770. Here's a quick video tutorial we made some time ago on how to do this with SprutCAM:

Special thanks again to CNC Cookbook and OnlineMetals.com for the software and material support. We've also found that the Wizards included in the Mach3 Controller really work well for this, albeit you'll need to do some cutting and pasting of code and a little math to get a multi-pass tool path like we are demonstrating here. For the programming here, we used the wizard to make a three-part program, adjusting the minor diameter after each pass until we get to the desired size. [nggallery id=41] You can find out the minor diameter that corresponds to the pitch diameter you want using a handbook or Machinist's program. For the 1-8 UNC example, our final pitch diameter of .915" means we went down to a final minor diameter of .851" (Check out the graphic from Gwizard above if your don't see why). The first pass went to .900". For the second pass, we went to final diameter of .851". The third pass is a skim pass, and cuts again at .851" to clean up. Verifying external threads using the "3 -Wire Method" How do you measure that you've actually cut threads to size? For most hobby and prototyping work, just verifying that the appropriate nut threads on is probably enough. However, if you want to verify with a gauging technique, the 3 Wire Method is most often used. Since a few pictures are worth a couple thousand words, here's some more information I found on the web on how this is done: http://www.discount-tools.com/techcontents/017.pdf http://www.qualitymag.com/directories/546/2009/315326/3%20Wire%20Thread%20Measuring%20System.pdf Happy Thread Millling!