It’s All About Fixturing

- Hot-Rodded Tormachs - Many of our customers are hotrod enthusiasts and vehicle customizers, but we have even more customers that are hot-rodding their Tormach machines. Tormach users are often owners of start-ups, engineering organizations, or even prototyping companies, which often leads to creating unique components and parts on their machines. The challenge, when developing uncommon parts, often comes in the Venn diagram of design, prototyping, and production. There is an array of compromises that occur amongst designers, prototypers, and machinists (though these are often the same person), but one of the most prominent is workholding. Having the ability to hold a work piece while milling, turning, or grinding is vital to producing valuable, accurate parts (not to mention safety). Oftentimes, a simple vice won’t allow you to hold multiple components for milling or hold an oddly-shaped work piece – that’s why we sell a Cast Iron Tombstone and a Vacuum Table. But sometimes, even these accessories aren’t enough for extremely unique parts. Like Scott Johnson, one of the teachers in our CNC Fundamentals class, says, “It’s all about fixturing.” That’s why some customers have taken to developing unique fixtures to hold their exotic parts. 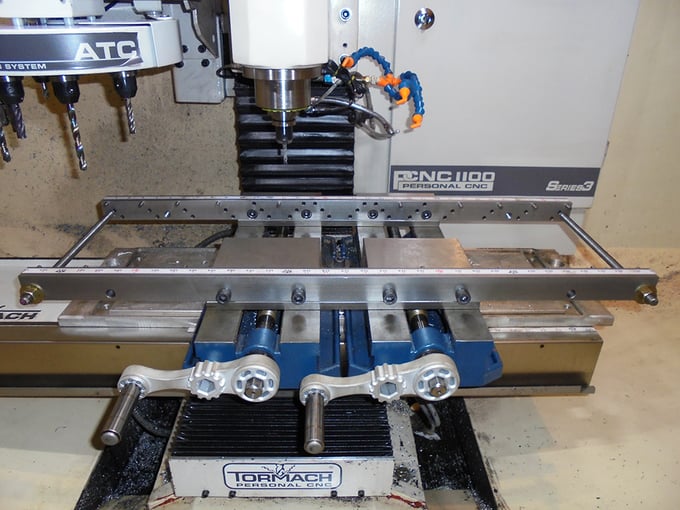 Joe Gerads has created speed vise handles that he developed on MEGAN II, which is his second PCNC 1100. Joe uses two 9” vises, but the factory handles hit within the PCNC 1100s travel, so he made his own – also in the process, looking to make something a little more cool than the factory standard. Joe does everything from wood working to short-run production for Artic Cat and the military – he mentions that the work his shop takes on covers everything from tiny parts to components up to 1¾ tons. With experience making parts for Apache gunships and military tools – one of which he received a medal from the Secretary of the Army for developing – Joe takes on what he refers to as hobby work. “I take on all the odd jobs others don’t really want, or may not be as profitable.” 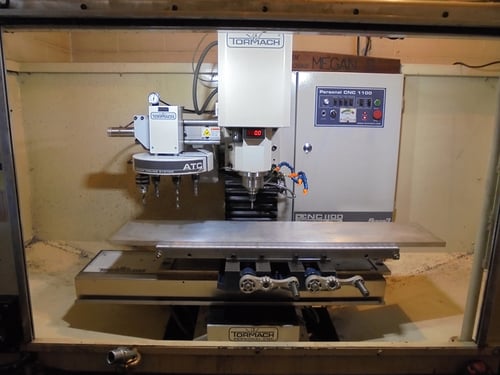 When asked about hot-rodding his Tormachs, Joe said, “My 1100s are more warp drive. I have a right angle drive, ATC, Quill offset, an autoloader, over 110 tool holders, mic/cam/scanner, a custom-built enclosure with integrated swing electric hoist, a chip conveyor, and an auto/manual door closure, just to name a few things.” Below is a video of his autoloader. [youtube]Imyo8C_SPkI[/youtube]   Joe is utilizing his two Tormach machines to their fullest potential – making things to make things. How have you hot-rodded your Tormach?

How to Drill a Square Hole – Tormach’s New Rotary Broach