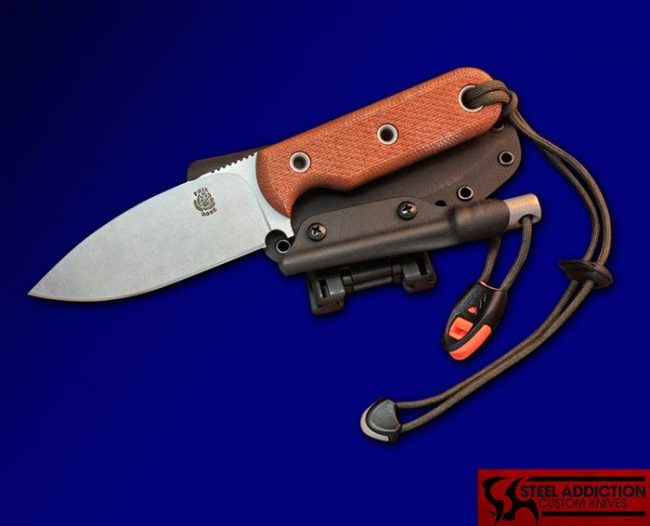 After an injury while serving time in the military, Phil Rose found himself delving into the world of knifemaking. His business, Phil Rose Knives, operates as a partnership between Phil and his father, and they use a Tormach PCNC 1100 to produce their custom knives.

"I started out doing everything manually - literally from scratching lines into stock to grinding and drilling all the holes manually - it's an insane amount of work," Phil explains. "Unless you're charging a couple thousand dollars a knife, there's no money in it that way. With automation, it is much more efficient."

Being a small business, Phil wanted to keep his costs as low as possible while remaining efficient and productive. "We were able to get a machine for not too much money - first we bought a smaller machine, and it turned out to be an absolute piece of garbage," Phil says. "We started looking at new machines and actually put a deposit on another machine. After six months of waiting with no delivery, we got our money back. Then we called up Tormach, they were out of stock, but said we could have one coming out of the next batch. Sure enough, we got it, and it's been a dream."

Phil has discovered that automation with his PCNC has made the business significantly more efficient and he is looking to do more. "The way I'm trying to set this up, the only hand work we are going to have is grinding the blades themselves. Virtually everything else is going to be machined. That probably saves me upwards of 70% of my time," he explains. "In my opinion, if you're going to get into this business, you're absolutely crazy not to get a CNC."

There are a number of knifemakers that use CNC machines, but it is a relatively new turn in the industry. "Ten years ago, CNC machining for custom knifemaking was unheard of," Phil says. "Tormach's market share in knifemaking is going to dramatically increase, I have no doubt about that."

Phil's choice of the PCNC 1100 was thanks to both the praises of Tormach's customer service and the ability to upgrade. As he works to improve his company's production, Phil is looking to buy a tool-changer and continue to upgrade.

"Whenever I speak to the other knife-makers thinking about getting a CNC, I always tell them that you're never going to find another company with customer service as good as Tormach," he says. "The machines are affordable, there's great customer service, and the machine size is ideally suited for knifemaking. Most knifemakers are inherently cheap, so they're going to always try and try to get by with what they can.

The fact that you can purchase a PCNC one piece at a time, essentially, and then upgrade it as you need is a very valuable thing." Normally Phil produces around 100 knives a month, but he is currently focused on programming their system with new knives and fixturing. "Originally my dad was going to be the one working on programming and CNC while I did manual operations, design, and marketing, but as time has gone on, I've learned to use the CNC. It's proven to be valuable to have two of us operating the machine."

He hopes to be producing at full capacity again soon, and has a goal to reach 500 knives a month.

RapidFire Technology USA Scales Up with a Tormach PCNC 1100