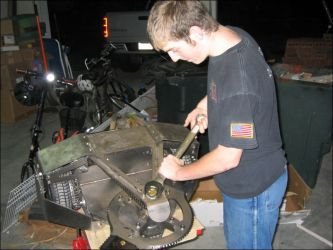 A Look Inside the Mechanics of the World's Most Destructive Sport

Combat robots undoubtedly satisfy a deep boyish urge to wreck stuff. But a closer look into the sport of combat robotics reveals something more. The escalating war of robots produces some surprising spoils. As you enter a technological future dominated by satellites, wireless gadgets, and hybrid cars, you may have these evil-natured robots to thank.