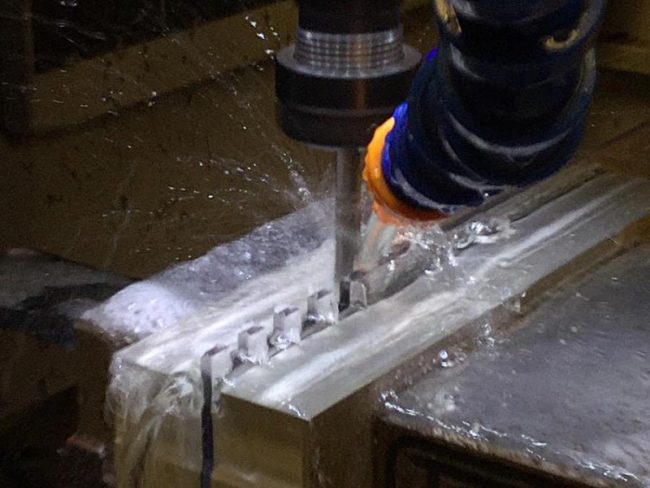 Adam Summers started his engineering education at a math and science public high school in New York City. He explains, “Stuyvesant offered wonderful opportunities for science, but for me the most important characteristic was there were enough shop classes that I could take two every semester for four years.” After getting degrees in mathematics and engineering in college, Summers changed gears and got a Master’s and Ph.D. in Biology.

His cross-disciplined efforts between biology and engineering lead to him founding the Biomechanics Laboratory at the University of California. He has since moved to the University of Washington’s Friday Harbor Laboratories where he is currently the Associate Director, doing research in the field of comparative biomechanics – an interface between physical/mathematical modeling and natural history. In 2010, Summers picked up a PCNC 1100 to add to his laboratory. “We use the Tormach in two ways. The first is to manufacture new experimental equipment,” he explains. “An organizing principal of the lab is that if you are using off the shelf equipment you are not pushing into new territory. We make test jigs, load frames, respirometry cells, and many other ‘one shot’ pieces of equipment.” The other use of their Tormach is vastly different than most machinists might expect. “The other use of the machine is to replicate biology, usually skeletal structure, in materials that allow us to test shape. For example, we make jaws of fishes from aluminum and use them to crush snails.” With his engineering and shop-oriented background, Summers had used Sherline mills in the past. “When I moved to Friday Harbor Laboratories I realized I needed a larger format mill,” he says. “I also really wanted CNC. The price point and serious purpose of the Tormach was attractive. The value was just great and I really liked the tooling system.” “When I decided to go for a serious CNC mill I realized that my skills as a machinist were simply not what they needed to be. I recruited Jeff Brash, a retired Chief Engineer from the American President Lines, who is a machining ace,” Summers explains. “Jeff does email, but CAD and CAM were not in his tool set. I am a computer geek and we agreed that I would teach him the digital end and he would teach me to use the Tormach without nipping off fingers or destroying too many tools. The partnership has worked wonderfully and Jeff looks at metal in a whole new way.” The PCNC 1100 has been an important piece of Summers’ lab; it has been vital to his research and progressive understanding of biomechanics. “I have had amazing support from Tormach. Not only have they delivered a wonderful product and stellar accessories, the intellectual support has been first rate. The company has been nothing but a joy to deal with and I am excited to see what new products appear.” Though he says there isn’t much likelihood of setting up much more of a shop, “but there may be a CNC lathe in my future.”

What Makes a Surface Grinder So Important?

PCNC 440: For CNC Newbies (and Everybody Else Too!)