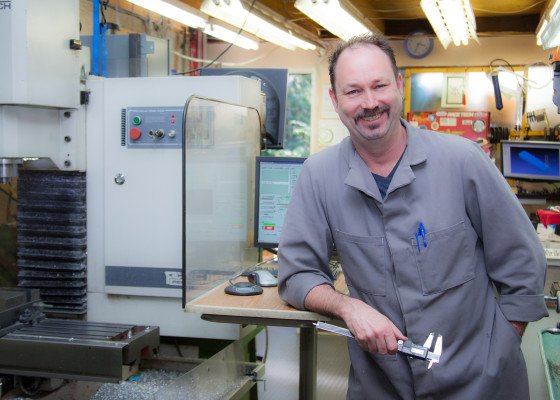 Jim Anderson has been a journeyman machinist in Canada for more than 26 years, and he’s built everything from racing motorcycles to hydrogen fuel cells. Parts big and tiny, Anderson has seen a lot as a fabricator. With his array of building knowledge and his two PCNC 1100s, Anderson runs a prototype development machine shop, Anderson Prototypes.

“The PCNC 1100s do a lot of different jobs on a daily basis,” he explains. “Plastic injection molds to stainless steel parts for submarines to plastic parts for various clients. I program them manually and with a CAM system.” Much of what Anderson’s machines work on is for small production runs and developmental parts. “I make lots of unique fixtures and holding systems to make weird parts.” Before starting his company nine years ago, Anderson used an array of different CNC mills as well as manual mills that were converted to CNC. “I have run many different CNC machines in my life… hundreds,” he says. During the early years of Anderson Prototypes, he was leasing a small CNC machine, but it suffered from terrible backlash and reliability issues – including a randomly crashing spindle – which caused him to lose clients. At the time, Anderson had seen an older PCNC 1100 run and was impressed at the value. So, when he stumbled on a used PCNC 1100 for sale, “I immediately called and told the seller that it was sold, and I would be right over. It was a low-hour machine in very good condition. This was a workable speed for me to make money with as a full-time machine shop,” he explains. Now, Anderson is a self-described ‘possibility generator,’ as he continues to grow his business. He sees Anderson Prototypes as being identified with the PCNC 1100s, as customers are amazed at the parts he delivers with the machines – he’s even thinking about getting a third PCNC 1100. His machines stay running at .001-.0015 repeatability, and he loves the fact that they run on 230 volt power, which he says makes it easy to set them up anywhere. “I get a lot done on them and I like that I can put them on a truck and take them to a show or a client and get to work in an hour of getting there.” In fact, he takes both of his PCNC 1100s to the Vancouver Mini Maker Faire. While on display, he mills out sculptures of hands made out of wood and passes them out to the crowds. “The kids can come right up and see what’s happening on the machines as they are cutting,” he says. “This is my 5th year, and I stepped up to be a sponsor. I am wanting to inspire and teach the next generation with my efforts, so this is a way to do it.”

Tormach Is Hitting the Road