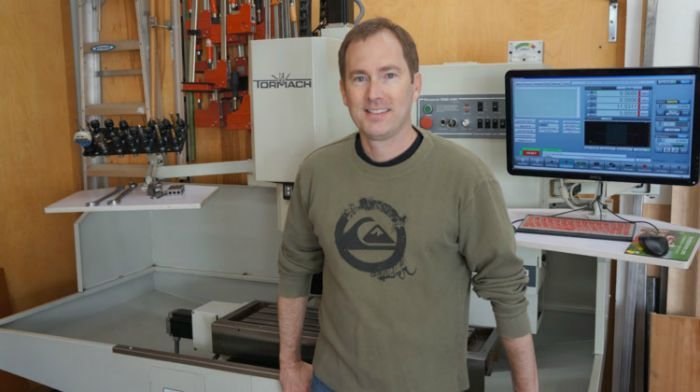 Making of a Maker: Kent Myers on PCNC

IT Program Manager by day, maker by night, Kent Myers writes extensively about his interests and innovations on his popular blog, KentMyers.net. “I’m a computer network manager with a mechanical engineering degree that I never really used. I’ve always liked to build and create things, but in my day job I mostly sit at a computer. So, I started getting into woodworking and have done a lot of projects in the past 20 years. If you’ve been to my website you can see some of the work I’ve done,” Myers explained.

“At some point, I decided it was time for a change of pace from woodworking. A friend of mine got me into metalworking and then I signed up for some local community college classes to learn basic machining. Soon I owned a mini mill, but it took less than a year to realize that I needed something more substantial with CNC capabilities. I found Tormach and went to a workshop in Wisconsin and placed my order for a PCNC 1100 that month.” Fast forward two years and a number of projects later, Kent reflects on the paradigm shift in his ability to make most anything. “I’ve found that I have this insatiable desire to learn new things. I wish I felt that way when I was in my 20’s. Life would have been so much different when I was in college. Now I want to learn how to do something, just for the personal satisfaction of knowing how to do it.” He added, “Most everything I do is an extension of asking, ‘Hey, let’s learn how this works.’ Certainly I don’t become an expert on these things, but I learn enough to make it happen. And that’s one of the reasons I really enjoy the Tormach so much is that it enables all of that.” “For the most part it’s just me making stuff for myself. Not necessarily because I can make it cheaper, but because of the challenge of making it,” Myers continued. Recently making a teleprompter/camera rail system with his PCNC 1100, Myers saved a considerable amount of money doing the project himself, “I built the standardized rail assembly that mounts to the camera and then the teleprompter that mounts to that. When I first looked around, I couldn’t find a rail assembly that was less than $1000. So, I just knocked one out in a couple of weekends for much less using aluminum and carbon fiber. That project has given me some ideas about other opportunities in the camera market.” Milling aluminum side plates for a driving simulator project, Myers said, “I thought having some brushed aluminum sides would look kind of cool. One thing I didn’t know how to do, and hadn’t done before, was the engraving of that logo. I took the image and brought it into AutoCAD as a layer and then dimmed that layer and traced the logo, which was surprisingly easy.” “I made three passes at it with a smaller cutter each time. I think the final pass was with a 1/16 cutter, which was the smallest I had. I was really paranoid about breaking it, so I went really slowly. But it turns out I didn’t have any problems.” A long-time automobile enthusiast, Myers uses his Tormach mill to make replacement components for his personal vehicles, “One of the cars I have is a project car that I purchased on eBay. It’s a replica of a 1955 Porsche 550 Spyder like the one James Dean owned. It has a lot of Volkswagen components, and any time something breaks on it, I’ll usually make my own part. The throttle linkage gave away one day, and the originals were made rather poorly, so I milled my own. And they’ve been working great ever since.” “My new hobbies change my attitude on how I look at most anything in life. Now my response is ‘oh yea, I can make that.’ Instead of panicking about a situation, it’s like ‘how can I fix this or how can I make this better.’ You just become much more self sufficient. I guess that’s really the whole maker attitude that’s so popular now.”

A Procedure for Digitizing using your PCNC Mill and Blender