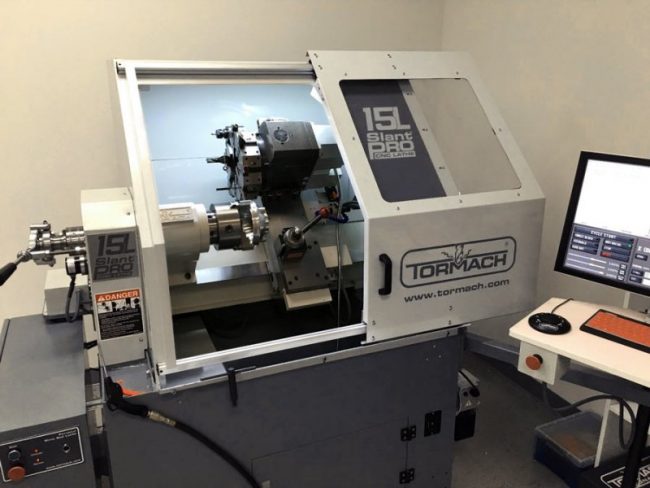 Luke Colby is a veteran of the space industry – he has both a BS and MS in Aerospace Engineering, he founded the BU Rocket Team at Boston University, worked in the combustion lab as a Master’s student at Georgia Tech, previously worked for Scaled Composites (an aerospace company owned by Northrop Grumman), and now he’s the president and CEO of Triton Space Technologies.

“I’ve always been fascinated with engineering and love the process of taking an idea from concept to finished machined part,” he explains. “In my ten years at Scaled Composites, I designed numerous machined parts for the rocket motor on Virgin Galactic’s SpaceShipTwo, and always loved the interaction with the machinists as we translated the parts from designs on the computer screen into reality.” That’s what led to Colby buying a Tormach PCNC 770 for his home. “I used it on nights and weekends to machine my own rocket engine and valve designs. It was a great learning experience and a good low-cost way to get used to all the usual pitfalls that people run into when they first begin CNC machining parts.” Colby started Triton Space Technologies, which specializes in contract engineering, in particular, for rocket propulsion applications, at the beginning of 2015. Combined with a larger Haas VMC, the company uses a Tormach 15L Slant-PRO Lathe for quick prototyping. “We find it very convenient to use the two machines in conjunction with each other to seamlessly create our finished parts,” he explains. “While I can’t give specific details on the work we do for our customers, I can say it’s largely one-off prototype work that the conversational routines in PathPilot are very helpful for. “In addition to contract work, we are developing a product line of low-cost propulsion system modules that we’ve been quietly working on in between jobs.” Triton Space Technologies’ biggest customer is Virgin Galactic, “we have been working extensively with them on the rocket motor for SpaceShipTwo.” Their customers range from word-of-mouth industry contacts to collaborators from previous projects over the last decade. “Other customers have found us through the website and even include a local Biotech company.” Colby has been impressed with the results, saying, “With care and a little experience you can run it very accurately.” In fact, one project that tested Colby’s concerns was a custom electrical connector fitting with some unique thread requirements: ¼-32 threads on one end and ¼-36 threads on the other end. “Neither of those are threads you’re going to easily find a die for at the local hardware store and we were able to CNC single point thread both sides with the Tormach 15L Slant Pro. It’s a great example of the kind of small part the 15L Slant Pro really excels at making.” He finds a lot of value in the machines that Tormach provides. “They provide a capability that even 15 years ago was ten times as expensive, so now you really can come up with a new idea and prototype it in your garage, which just wasn’t possible that long ago.” Colby explains. “You can even use them in conjunction with higher-end machines, as we do. They are ultimately a versatile tool to have in your tool box. The other advantage of the Tormach, in particular for beginners, is that they aren’t so powerful they can cause thousands of dollars of damage if you crash them, so they are a great platform for people to learn CNC on.” While Triton has kept a pretty low profile, “holding our heads down and supporting our biggest customers,” Colby says. “We have some pretty exciting rocket-related jobs and ideas we are working on, and you will start to see us roll those products out in 2016.” Visit www.triton-space.com for more info on their ever-expanding list of projects.

Stronger, Lighter Parts for Faster Racers with a Tormach