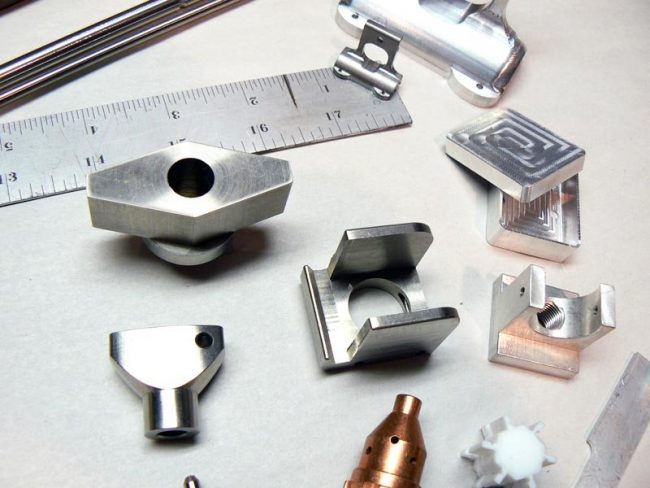 May the Force Be With You: Long Island Machine Shop Makes Replica Han Solo Blaster Kits

Dave Chalker of North Massapequa, New York has over 30 years of machining experience and has spent half that time working for a machine tool builder as an Applications Engineer. Dave formed Dark Energy Creations a year and a half ago to focus on general and specialized machine work, 3D solid modeling, CAD/CAM, and 3D printing. But Dave says the main focus at Dark Energy Creations is custom machining. “I do machining on all other kinds of stuff, ranging from motorcycle brackets to prototypes for medical devices,” he said. “One of my ‘cooler’ projects was to make a hobby model kit, but instead of molded plastic it was all metal. The customer would have to fit, finish and assemble the different components.”

To fans of a galaxy far far away, the kit is a cult favorite—it converts a Mauser handgun into a Han Solo blaster nearly identical to the original gun used during the filming of the original Star Wars movie trilogy.

“The original Star Wars movie was made in England in 1977 and I guess the prop guys over there just grabbed a German WWII Mauser handgun and bolted parts on to what became Hans Solo’s blaster,” he said. “For people who have real or replica Mauser and want to make a Han Solo blaster, I made the kit with all the parts that go onto it.”

In the recent media spotlight for the Han Solo blasters, Dave is on his second batch of full-sized kits and is putting the finishing touches on a 1/3 scale keychain kit. All of the milling features and engraving for both kits were done on Dave’s Tormach PCNC 1100.

He added, “One of the guys from the MythBusters’ website www.tested.com bought my full-size kit for review and I hope to see it up on the site soon. I’m pretty excited to see what they have to say.”

Running a PCNC 1100 Series 3 with an ATC, the key to making the investment in the equipment was being able to use his existing household electrical service.

Dave recalled, “We were looking for almost six months before we bought the Tormach mill. We looked all over and when it came to buying a Tormach, it was a perfect combination of size and price. A lot of the other machines want three phase. I wanted a little bit bigger table and linear ways, but I made the decision because Tormach seemed like a more stable and established company. I’ve been in the machine tool business a long time and you’ve got companies coming and going. You buy a piece of equipment and in six months the company’s not there anymore.”