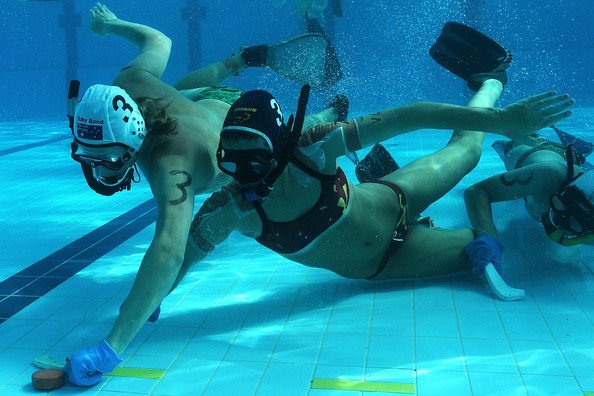 The puck dropped and players with gloves and sticks reacted. Instead of zipping across ice, they jetted through water during the 2006 Vancouver Underwater Hockey club game after a specially designed puck was put into play.

This puck, named the RETRO, was the brainchild of Gordon Lamont, a mechanical technologist with an interest in underwater hockey. The solid brass make-up is unique to pucks in the underwater hockey industry, typically designed as a lead puck shelled in plastic, and a design that centers its weight on the edges, making the puck fly faster and further than its counterparts.

The RETRO, which was updated to RETRO2, was more of a side project for the self-taught machinist who entered the designing industry in the 1970s.

“I worked as a mechanical designer at a research company which had a machine shop that consisted of a manual lathe and a Bridgeport style mill,” Lamont said. “The machining was really just to emphasize the importance of working drawings. In those days everything was hand drawn on vellum with a pencil.”

In 2001, he started Tandem Technologies, a fuel cell hardware designer and manufacturer. After an initial machine purchase, Lamont realized he wanted to do more in-house machining and his colleague pointed to Tormach.

“It was easy to talk to somebody at Tormach, and everything that I heard was good. It was also the right size and cost for what I was trying to do.” His first purchase was a Tormach 770 PCNC. He says the initial value of the machine and outstanding support of his purchase didn’t end when he got the machine, so he bought another - the PCNC1100.

I realized the 770 was capable of doing most of my work, and I wanted the bigger work envelope and to segregate the messy metal machining from the graphite work. I added the enclosure and tool changer, which really makes production a breeze. The lathe was added relatively recently and is configured for gang tooling. I used to make high-count (up to 100) small parts.”

Now, Tormach machines mill his pucks and fuel-cell hardware pieces. “The machines have allowed me to take on more custom work that just wouldn't make economic sense if I had to outsource the machining,” he said. “My turn-around times are a lot faster too.”

The Tormachs mean he can prototype and develop custom work for his clients, but also himself. Hockey isn’t Lamont’s only hobby – diving is as well. He makes custom pieces for his various dives, which he often photographs and shares online in breathtaking photos. Lamont commented on the versatility of Tormach and says these unintended uses make him appreciate the variability in accessories.

“The la carte menu, allowing a relatively small initial investment, is a big advantage. Features can be added (eg drawbar, tool changer, enclosure) as confidence builds in the suitability for the job at hand.”