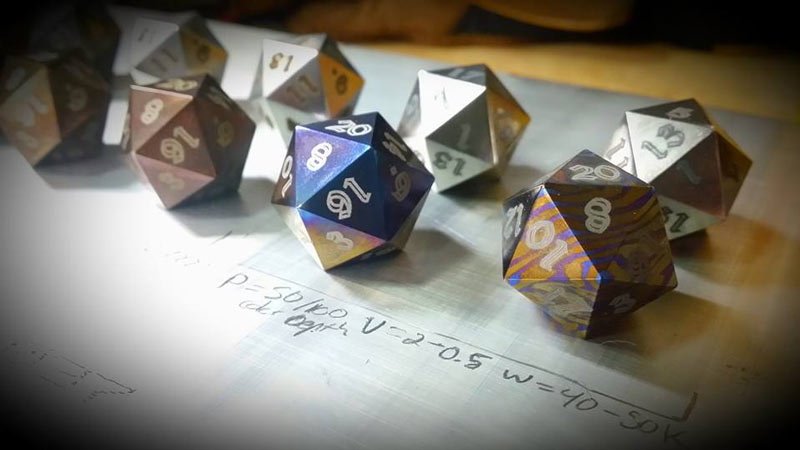 Artisan Dice is a company that takes gaming very seriously – so much so, that they have committed themselves to $400,000 in equipment, including two different Tormach machines.

The company produces exactly what its namesake implies, various craftsman-quality dice. Charlie Brumfield at Artisan Dice says, “We work primarily with exotic woods and around 30 different kinds of metals. Brass, bronze, copper, steel, an awesome titanium… we work with a lot of different metals.”

With help from their PCNC 1100 and 770, the company did $700,000 in sales from Charlie’s 400 sq. ft. garage. In fitting Dungeons and Dragons fashion, the Artisan Dice team has named their PCNC 1100 and 770, Behemoth and Colossus. The market share for such a company may be a surprise to some, but Charlie explains, “Do you remember those D&D guys you used to shove into lockers in high school? Most of those guys became CEOs and CFOs of companies… they’re making good money. So we have custom designed dice for them.”

The typical ages for Artisan Dice’s customers range from 26 to 38, and they are dedicated customers. “We do a ton of volume with very few guys actually working,” Charlie explains. “We use the Tormachs as production machines. I realize that they’re not typically production machines, but we use them because of the space advantage. The Tormach is the best machine that you can get that’s going to fit into a small area.”

Artisan Dice manages to put both of their Tormach machines, as well as five other small CNC machines, to full use as they produce dice of various exotic materials for D&D players and game lovers.

“For the hard stuff, I really needed the spindle speed of the 770. The Tormachs can pull off the fourth access, and that’s what we use them for. We also use the 1100 for creating tools for the other machines in the shop,” Charlie says. “They are insanely useful, especially considering that I’ve got five people that work part time - and that’s very part time. Something that would take me the better part of a day to mill on another machine, I can get done is six minutes on the Tormach.”

When the PCNCs first arrived at Charlie’s garage, he wasn’t expecting Tormach to deliver both machines and all of their components in one delivery. After a truck backed into his driveway, Charlie found himself with a two-car garage full of pallets and boxes. Though the 1100 and 770 are fairly compact prosumer machines, they are the largest of Artisan Dice’s arsenal of machines.

Charlie takes pride in the fact that his company has managed to operate out of his garage – a feat that he attributes to his Tormachs. With plans to move to a larger shop space in the near future, Charlie intends to keep both machines running as they crank out die for both casual and hardcore gamers.

More than Your Basic Mill

Settling the Debate - CNC vs 3DP