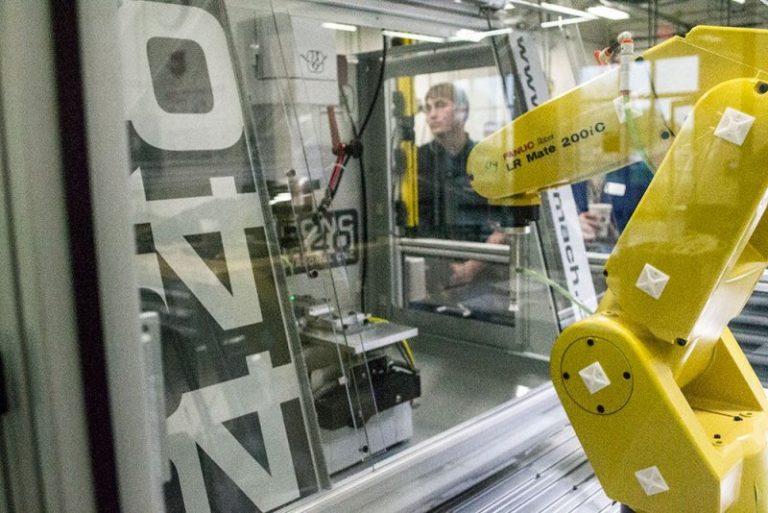 The world of manufacturing and engineering is constantly changing and progressing, and so does the education to get quality workers in those industries. The Madison College Robotics and Automation program concentrates on preparing students for industry by giving them hands-on experience with a variety of tools and machines, including a Tormach PCNC 440.

“Over the years, I’ve always been fascinated by these low-cost, highly capable CNC machines,” explains the Co-Program Director, Peter Dettmer. “A lot of companies still do a lot of machining, and trying to automate that is important for being efficient – so things like loading and unloading parts automatically and having a complete process in place.”

Dettmer’s students took to integrating a Fanuc LR Mate 200iC robot with a PLC system and the PCNC 440.

“The concept was to automate any type of machining operation that might be found in manufacturing,” says Roger Stanic, a student at Madison College. He and another student, Issac Hansen, worked to create a system that moved a blank piece of aluminum down a conveyor, picked and placed it in the mill, performed six different operations on varying sides, and then removed the finished piece, placing it on an outbound conveyor.

“We used a Fanuc robot with a built-in vision system that can pick parts off of a conveyor. We used three pneumatic cylinders the clamp the part, and another to rotate the piece 90 degrees for the next phase of the machining process,” Hansen explains. “We use a PLC to control the vise and it also takes communication from the robot so we know what cycle the robot is in and from the Tormach so we know when it’s running and what phase it’s on.”

“We’re trying to incorporate more of the real-world experience into our program,” Dettmer says. “We worked with Tormach because it fit our scale and price point. The idea was to combine robotics, machine tending, and CNC programming.”

“Our students get so much out of interfacing with different pieces of equipment because in industry they’re going to run into all kinds of machines,” he continues. “Here was something that was new – they’d never had a machine that had a USB interface to talk to a PLC.”

Madison College houses an array of industrial CNC machines, “those are huge machines that cost hundreds of thousands of dollars – a lot of students are intimidated by that type of equipment,” explains Dettmer. “When they see the smaller equipment, like the Tormach that doesn’t look quite as scary and has a simpler user interface, we found that the students jump right on it.”

Stanic walked in with only some G-code and CAM classes in his repertoire. “I found PathPilot very simple to use and very straight-forward,” he says. Without any previous hands-on experience with CNC equipment, he found the PCNC 440 “great for what [they] were trying to accomplish.”

Dettmer sees integration like this as only the first steps into using Madison College’s PCNC 440 with other automation, like the Fanuc robot. “I look forward to using the PCNC 440 more, either on a manufacturing level for our students to make parts or to integrate again and take the machine tending and integration even further.”

Students Gear up for FIRST Robotics with Tormach Machines