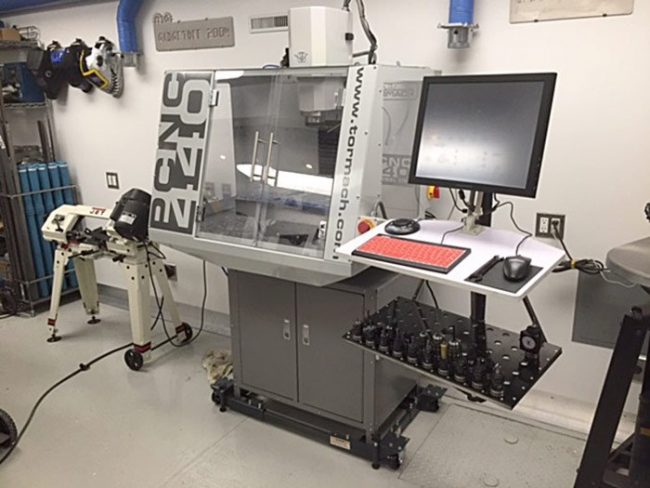 Pioneer Maker Adds PCNC 440 to His Arsenal of Tools

Mike Dubno has been a maker since before making was a thing. “I’ve been involved in the maker movement before there was one, but in a different way than a machinist or something like that,” he explains.

Dubno has been involved in helping to bring Maker Faire to New York, he is a chairman with the NYC NJ FIRST robotics group, and founder of Gadgetoff – an invite-only event that is coined as an intellectual salon of the future. Before ending in 2009, the Gadgetoff event was a prime location for inventors and entrepreneurs to show and share their wares and was even featured in the New York Times. Now, he is one of the first owners of a Tormach PCNC 440.

“I retired from Wall Street, and I feel like playing and inventing again,” he says. That’s why he took to building an elaborate shop in the basement of his New York City home – which is as easy as it sounds.

“We removed something like 250,000 lbs of rock to make my shop. That was all removed by hand through a hatchway because there’s no stairway direct to the street.”

In fact, Dubno and his brother were featured in Popular Mechanics thanks to his epic basement remodel and commitment to the maker community. To get the new machine to his shop, Dubno had to enlist help, who had to “monkey [the PCNC 440] down an indoor flight of stairs. They pretty much moved it to my basement shop by hand,” he explains. That’s part of what inspired Dubno to buy the small mill.

“I saw the 440 at Maker Faire. I was looking and hoping that there would be something like a nice CNC machine there, because other machines that I’ve converted to CNC, without ball screws, are a waste of time.” Space was the Dubno’s biggest selling point on Tormach.

“Being able to move a machine into my basement was an enormous issue,” he says. “The 440 hit all the criteria for a sweet spot where you get a lot of machine that you can get into a tight spot.”

With his brand new PCNC 440, Dubno has already gotten started on projects and has many more planned. His first is working with videogame developer and former astronaut Richard Garriott to develop automata – attempting to imitate life with a mechanical structure.

“I’ve decided to work on a kind of light fixture where the fixture is electronically steerable. Instead of just making an electronically steerable light fixture, why not make it so it has computer controlled tentacles to move lights around,” Dubno explains. “So, totally useless, but I want to try it. With the 440, I started making little vertebrae parts. Those vertebrae will sit along a tube that will carry power to the light and be controlled using some steel cable. That’s the idea. Now, whether any of this will work or not, who the hell knows. But that’s the whole point, right? You draw something up, you prototype, you see that it works, and then you figure out how to make it more efficient and produce as many as you need, and then if it turns into something useful, you can actually market it. I don’t need to market anything, so I do this for fun.”

His first cuts on the machine were to make workholding for the vertebrae components of the lamp. “I picked this part because I really didn’t know how to do a number of the workholding things that were required to pull it off. It was a good project for my first because I had to figure out how to make the negative of the part for the jaws and whatnot.”

Dubno is already looking towards his next projects, like a Colibri sculpture and a brass or bronze replica of the Greek Antikythera mechanism. “It’s the oldest known computing device on earth – about 2200 years old. Found in a shipwreck off of Antikythera, Greece,” he explains.

“Inside is a geared mechanism that has at least 30 gears to it.” The Antikythera mechanism was used to predict eclipses, keep track of various calendars, and probably showed the location of the five known planets at the time.

“I started modeling the Antikythera mechanism, and I’ve spoken with the guys who did a lot of the work to figure out how it worked. Then I made a CAD model in [Autodesk] Inventor and printed it on my Epilog laser… because I could make gears. It stimulated me to make something.” Now, he’s going to make a true-to-life replica of the mechanism on his PCNC 440.

“To me, you buy tools so that you can make whatever you want. Sometimes you buy a tool because you have a specific thing that you want to build or a specific problem that you want to solve, but I truly look at tools as something to stimulate my creativity,” Dubno says. With a new 440 added to his tool arsenal, it’s hard telling what this serial tinkerer will make next in his workshop.

The New Tech Ed – Making, Teaching, Tools, and Mixing It All Together