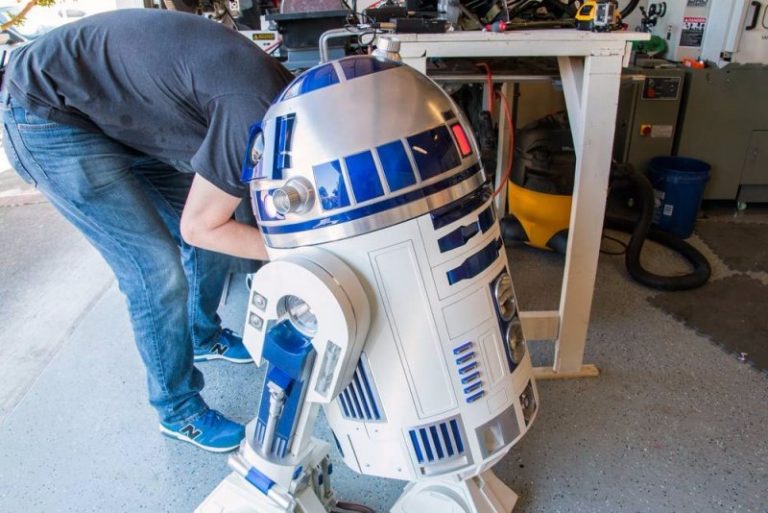 From Proton Packs to R2-D2: Movie Prop Replicas with Tormach

Jesse Hayes is the co-founder of a video game company, S2 Games, and owner of Puzzlebox Entertainment, but he’s also an artist and maker when it comes to movie props.

Using his PCNC 1100 mill and his 15L Slant-PRO lathe, Hayes creates movie prop replicas that are true to the originals. We first met Hayes when he was using his PCNC 1100 to build a working, scale R2-D2. The aluminum astrodroid is not an easy build, which is why there is a club of dedicated fans that work together to create the most accurate replicas possible, Astromech.net.

“I had always kind of built little robots and engineering projects, so when I saw an R2-D2 at a Maker Faire, I got really excited and it seemed like a fun project to build,” he explains. Now he’s working on a new R2 unit.

“The fun part about the R2 is that you can continually add gadgets - little computer arms and periscopes - and one of the really tricky things is to get the two to three leg transition,” he says. “I want to take my second R2 to that level, which is really difficult - and if you’re thinking of building an R2, you shouldn’t start with that - but it’s going to be a fun challenge.”

Recently, Hayes completed a replica of Rey’s blaster from Star Wars: The Force Awakens, in which he had to rely on memory and some Disneyland trips to reverse engineer and recreate. He documented the process on his YouTube channel, and plans to do more in the future.

“The whole process of doing these props and things is that I just love to learn things and figure stuff out on my own. I built the wand for the [Ghostbusters] proton pack by profiling parts on the Tormach and then welding them together. I’d never welding anything before, let alone TIG welded, but I got a TIG welder and learned because that’s what it required to finish the prop,” he explains.

In his free time, between designing video games and creating droids, Hayes does astrophotography for which he uses his mill and lathe to create parts.

“Every time I do a new project I try to focus on something new I can learn or a tool I can learn. I want to build up enough knowledge that I can just make whatever I want in the future.” Hayes’ garage doubles as his workshop.

“I’ve kinda got a really small workspace,” he says. But the footprint isn’t the only thing that drove him to buy Tormach machine tools. “The Tormach caught my eye because of customer reviews I had found and tremendously good support. The solutions that Tormach offers with the machine were a nice plus. I knew everything was going to work together - I didn’t have to piece things together from different machines.”

We Love Steel, and Here’s Why

Workholding of the Month: 3D-Printed Fixtures