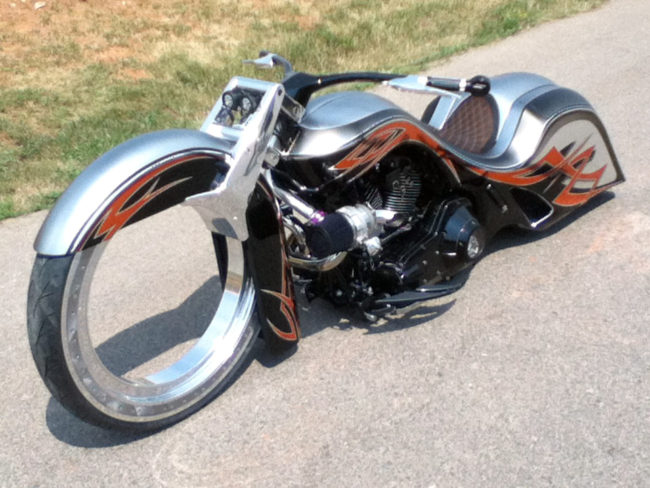 Scott Phillips grew up around a machine shop. His dad tried to get him involved in fabrication, but to no avail. It wasn’t until years later that Phillips fell into machining as a career, and then he really took to the world of manufacturing.

“Manufacturing is so vast that you can’t learn everything,” Phillips explains. “That is what’s cool about it.” As a full time job, Phillips works at Quantum Devices where they use industrialized machinery to help their customers through the various phases of the product design and development process.

At home, he uses his PCNC 1100 to do everything from prototyping to various maker projects. Phillips spent time working for a local company to develop customized parts for their modified motorcycles. He helped the company prototype and develop components like brackets for brake calipers and a hinge system for side bags that close automatically.

The designed brackets that hold the brake calipers were too large to fit in the PCNC 1100 work area, so Phillips used an indexing technique to create various prototypes out of wood. Once the design was solidified, adapted the code for a much larger production machine. Bikes that feature his work have graced the pages of American Bagger and Baggers, as well as making appearances at the Sturgis bike rally.

Like almost every machinist, Phillips is always looking for more shop space. “I’d like to expand on the house a little bit, and get myself a little bigger area,” he explains. “I’d definitely like more than just the PCNC mill… I’d like to get the [Slant-PRO] lathe with the turret on it. You need a compliment for a mill – you gotta have a lathe.”

Phillips plans to continue expanding his skillset as he helps to grow at work as well as within his home shop. “Obviously, everybody would like to work for themselves and make a ton of money, but we’ll see how it goes.”

It’s clear that fabrication and design have become a major component of Phillips’ everyday life. “The coolest thing about creating stuff and designing things is taking a theory or an idea and then being able to place it in your hand,” he explains. “The headaches that go with designing and programming are all worth it when you have that tangible object at the end.”

Getting from Idea to Part: CAD – CAM – Cutting