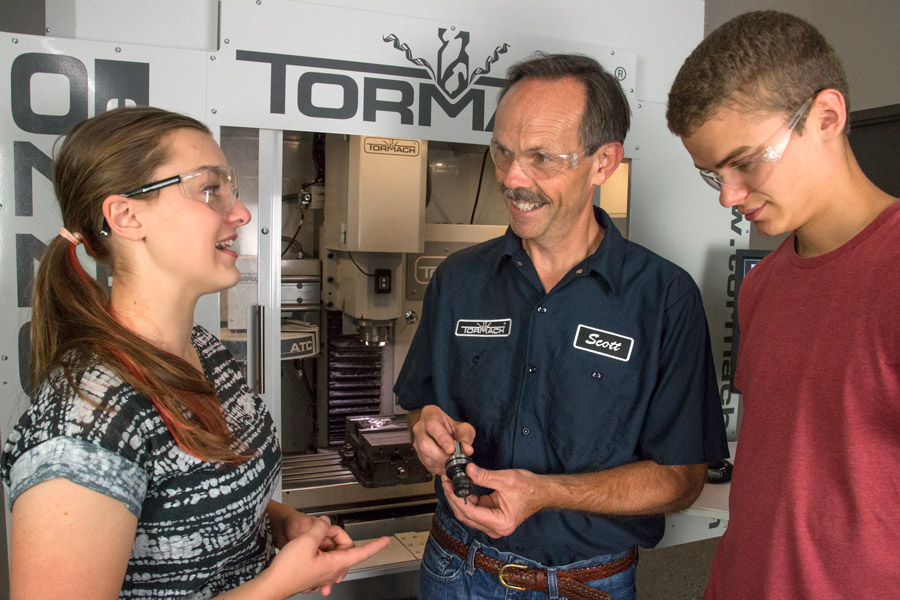 The New Tech Ed – Making, Teaching, Tools, and Mixing It All Together

Last week, we had a visit from the Milwaukee Maker Space, which is just a short drive down the Interstate. And the week before, folks from a Madison, WI makerspace, known as The Bodgery, joined us for a product demo. Last fall, another Madison makerspace, Sector 67, got a PCNC 1100 for their growing shop. At Tormach, we’ve always had an affection for makers. We’ve witnessed, first-hand, how the world of making and tinkering has helped to usher STEM/STEAM movement and how making and educating have continued to evolve. Educators are becoming makerspace owners/organizers, and makers are becoming teachers, and as a machine tool-maker, we couldn’t be more excited. Makerspaces have always provided crowdsourced tools to their members, like Sector 67’s PCNC 1100, but now more than ever, we’re seeing schools and colleges take advantage of these spaces as well. What’s more, these organizations are embracing the insertion of education into their spaces. You go to a makerspace to both use tools that may otherwise be unavailable and learn how to use new tools – all of which, looks to inspire more creative engineering and fabrication. Proper education is key to cultivating successful makers, while making helps to both galvanize and stimulate education. The evolving combination of education and making is sure to continue expanding the horizons of the tech world, and engineering in general. Getting tools in the hands of these students is important to making sure that both makers and educators are successful. We’re excited to have so many makerspaces using Tormach machines to do so – and many great makerspaces and schools right in our backyard. Tormach will be making appearances at the International Technology and Engineering Educators Association (ITEEA) conference on March 2-4 and we’ll also be at the Bay Area Maker Faire May 20-22.

END_OF_DOCUMENT_TOKEN_TO_BE_REPLACED

It’s undeniable that education is vital to the advancement of both individuals and civilizations, and with each passing generation (each passing year, even), being educated is becoming more prevalent to success. Some would even argue that it is essential for survival. But, the landscape of education is changing – it has been for some time now. Jobs that had previously been considered “unskilled labor,” now require a 2- or 4-year degree, at a minimum. Training is less-often an on-the-job endeavor these days, and the need for technical training in the classroom has increased drastically. This leads to the buzzworthy term, STEM (shorthand for science, technology, engineering, and math). The awareness of STEM education, and its significance to the future workforce, has been growing at a rapid pace, but engineering and manufacturing businesses are still finding it a challenge to hire qualified candidates. It has been said by many sources that the key to successfully educating kids, especially in the STEM fields, is hinged on keeping kids interested throughout their education process. According to Education.com, “Researchers have found that one-third of students lose interest in science by fourth grade. Another 17 percent lose it in middle school.” Let’s be honest, STEM can be challenging, and when things are challenging, kids can have a tendency to drift toward the easier routes. That’s why keeping their interest is vital – the idea goes something like: When something is cool enough to push through to the end, kids won’t mind doing work to get there. They may even embrace the challenge. There’s an old Chinese proverb that says: