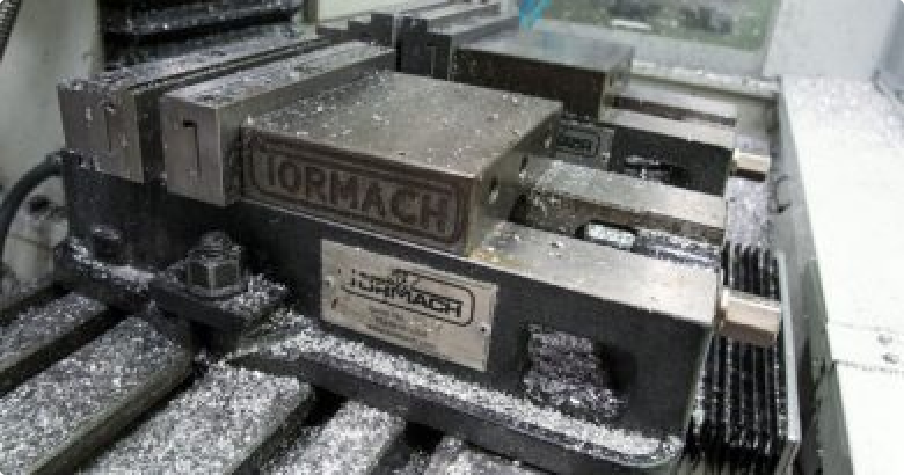 A Machinist Vise (also called a Milling Vise) is probably the most popular workholding solution available for milling machines.

What Makes a Good Machinist Vise?

A good Machinist Vise is well made, typically of cast iron. It operates smoothly, repeatable, and with a wedge mechanism that pulls the movable jaw down onto the bed so the part is not lifted due to deflection as the jaws are tightened.

Don’t scrimp on your machinist vises because they’re the Workholding Solution you’ll use most often.

Clean the Table and Tram the Machinist Vise

Before putting any vise on your machine table, be sure to clean the table of chips. You don’t want to trap a chip between the vise or table. If you have a T-Slot table you’re mounting the vise to, you’ll probably want to tram the vise as well.

Tramming a vise is the procedure of using an indicator to sweep a vise jaw (you want the fixed jaw, not the movable jaw) so you can adjust the vise position until the sweep shows the vise jaw is parallel to the axis as it moves.

Learning to tram (or “square”) a Machinist Vise is one of those basic skills every machinist must learn early on.

How to Tram a Vise on a Mill

Having the vise properly installed and trammed, the next question is proper use. Most of the time we’ll want to sit the workpiece fairly high in the jaws. This is done both to provide access to the workpiece and because it provides more repeatability the less of the workpiece is gripped–there’s just less area for a trip or other irregularity to influence what’s going on.

We set the workpiece high in the jaws typically either by using a set of Vise Parallels or because we have jaws installed in the vise that have a step machined fairly high on the jaw. We may either machine the step ourselves (in the case of soft jaws) or purchase jaws with a step already machined.

Clamping Outside the Jaws and Other Jaw Tricks

There are a lot of Vise Jaw tricks but one of the first to be aware of is that you can mount the jaws either inside or outside the normal jaw mounting locations. Mounting outside allows larger plates to be gripped in the vise easily: 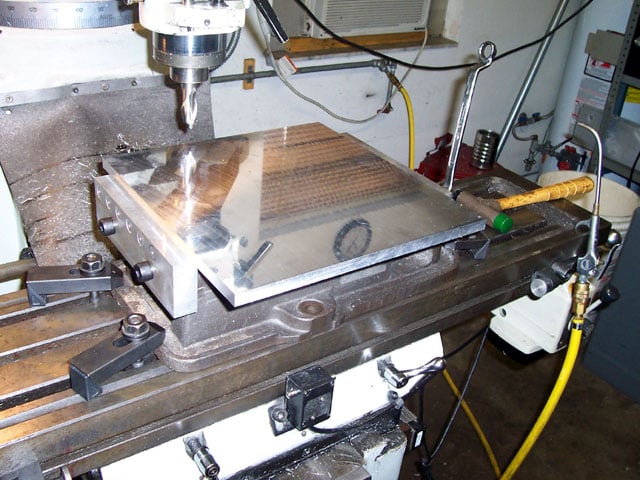 By mounting the jaws in the outside position, quite a large workpiece can be accommodated. 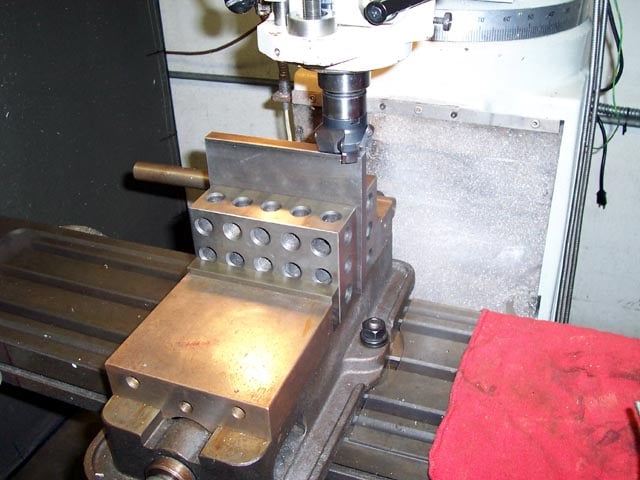 Increasing rigidity is always important. For this operation, two 2-4-6 blocks are used as a vise jaw extension to help support the plate on end better.

There’s an old saying that if you want to make full use of your machine you need to use every square inch on the table. Most machine tables can accommodate multiple vises, and it is very common to install multiple vises on a mill table.

Our photo above of side by side vises shows one such setup. It’s not uncommon to see four or even six vises on a larger milling machine. The more the merrier so long as travels will accommodate it because the more vises you have, the more parts you can machine before the machining has to stop so the operator can load new workpieces.

When you have multiple vises on a machine, it is convenient if they match in all the key dimensions to within a decent tolerance. That way if you are duplicating a setup and get the vises in a different order, all will be well.

Another trick that’s possible with two vises is to use jaws that span both vises for handling really long parts: 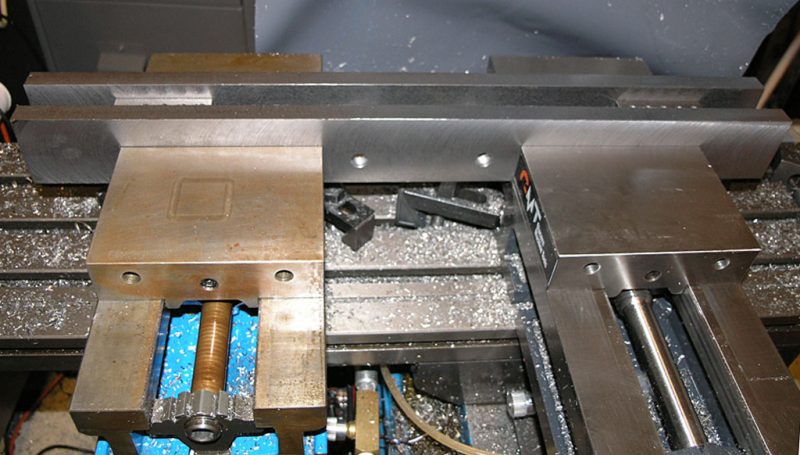 I made that set of “Jaws of Doom” for a project that required machining a thin aluminum panel for some electronics and they worked out great.

Having spread three or four vises across your mill table, you’ve pretty well taken advantage of the X-Axis. But, there’s an opportunity to take better advantage of the Y-Axis by using Double Station Vises: 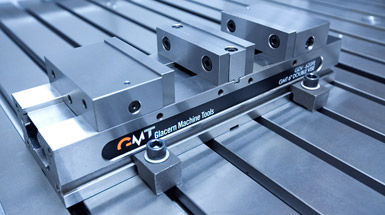 A typical double station vise is like 2 vises in one: you can put two workpieces instead of one. With judicious use of double vises you can really multiply the number of parts that can be worked at the same time on your mill’s table.

Vises to Hold Other Workholding Solutions

Between using multiple vises, double station vises, moving the jaws around, and even using jaws that span multiple vises, quite a lot is possible using just vises. In fact, you can even use the vises to hold other Workholding gadgets. It’s a very common trick to drop a sine vise into a Machinist Vise to get jaws working the other direction: 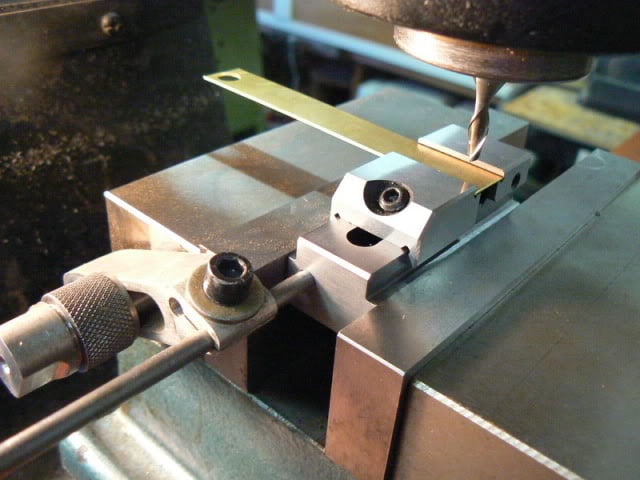 You can also create small plate fixtures that are designed to sit in a vise, creating what is often called a “vise pallet” since the individual plate fixtures can be swapped out of the vises much like pallets. 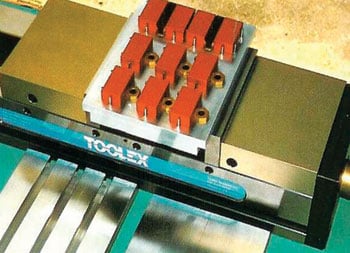 In general, solutions like Vise Pallets are created to enable vises to be left on the machine in shops where the flexibility and simplicity of vise workholding is ideal for most of their jobs.

Tormach made a great suggestion over in their blog which was to use a Sine (Toolmaker’s) Vise as a vise pallet.

Soft Jaws on milling vises are a very popular form of workholding. The idea is to create aluminum vise jaws (since aluminum is softer than ferrous materials that’s where the name comes from) that are customized for particular jobs. Sometimes a more durable material is advantageous, in which case we have Hard Jaws.

Here are some examples:

Use soft jaws to locate and hold a larger round part. A “V” is often seen, but it won’t support the part as well as the soft jaws.

As mentioned above, we don’t want to grip the whole height of the part in the jaws. A particularly thin grip can be had with dovetail jaws. The little red circle points to the dovetail which locks the workpiece in from slipping upward under heavy machining. These are CarveSmart quick change jaws.

Here’s a common setup. The part is machined from a block on the left (those are the same CarveSmart dovetail jaws). Then the part is flipped in a set of custom soft jaws on the right that are the mirror image of the part. A Face mill then takes off the little bit of flat stock left from the original material (that’s already happened in this photo). 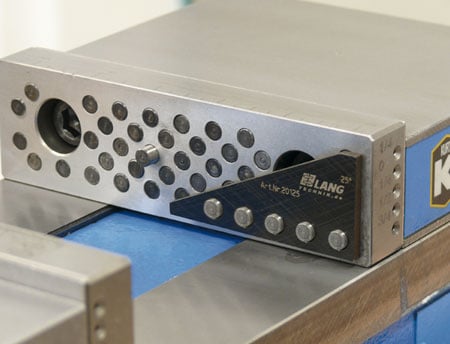 Lang Innovations makes these neat jaws that make it easy to set the workpiece in the vise at a precise angle when needed. The pins can be individually pushed in to create angles and other holding patterns too.

These are but a few examples. When using Custom Jaws, your imagination is the only limit. Well almost, table size will play a role as will the number and type of vises you have available.

I hope you’re getting the idea that Milling Vises with Custom Jaws can be a powerful workholding solution. So powerful, in fact, that a lot of work is done solely with this style of Workholding. Shops spend a lot of time creating Custom Jaws and often box them up in storage to use for other jobs or in case a customer reorders a part.

Even though the vises spend most of their time on the table, we still have a Setup Time bottleneck in the time it takes to change vise jaws. Maybe Syou saw this coming, but there are a variety of Quick Change Vise Jaws available too. The CarveSmart jaws we pictured are one variety, but there are many more.

Knife Maker Uses TITANS of CNC: Academy and a PCNC 440 to Launch His Business