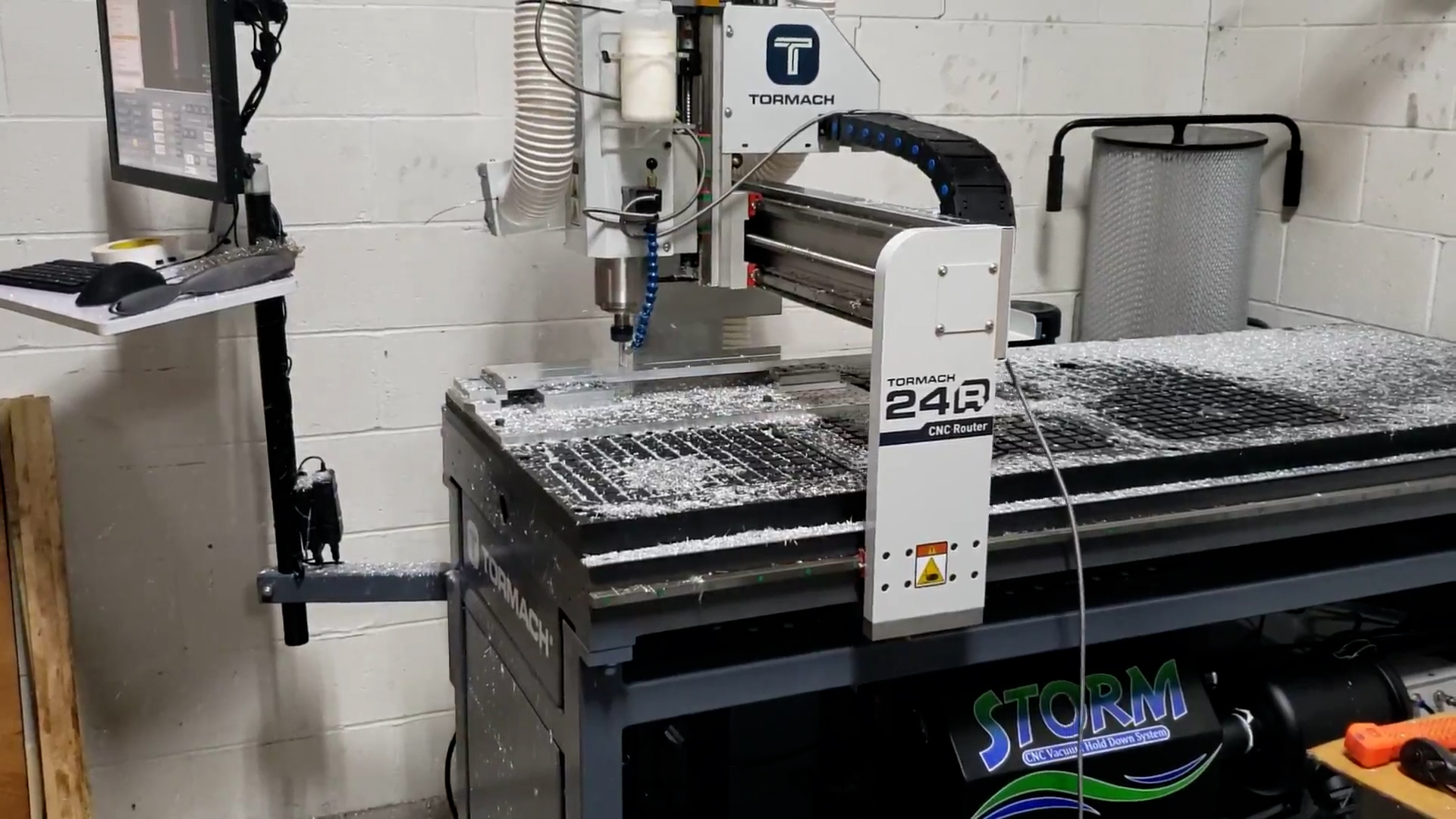 Ever since Saunders Machine Works started in 2014 we’ve been using Tormach CNC mills in the shop for prototyping, job shop work, our CNC training classes, and production – so it should come as no surprise that recently we’ve been making chips on their new 24R router!

We spent a few months with a DATRON Neo in our shop for ProvenCut, and while we didn’t need a router at the time we found it filled a gap we didn’t even know needed filled. With its time on loan from DATRON up, the question we’re asking is can the 24R fill that gap too? Tormach’s entry into the prosumer router category has us pretty impressed, so let’s jump right in.

The first stand-out feature of the 24R is the cast iron machine frame – while it may not be as rigid as your standard C-frame CNC mill, the 24R’s frame helps makes it a very rigid and stout gantry style router. Because of this, we’re interested to see how it holds up against materials such as steel (which many routers struggle to machine well). Be sure to keep an eye on ProvenCut to find out, as we’ll be publishing recipes as we put this machine through its paces.

The router also benefits from its use of HIWIN linear rails and ballscrews for linear motion – however the machine has a maximum feedrate of only 200IPM. While other routers are typically a bit faster, we think the rigidity of this particular machine is a fair trade-off. We’re also hoping to see a faster, servo “X” version of this machine.

Based on our Datron success, we outfitted the 24R with the vacuum table, which covers the entire ~ 2’ x 4’ work area. The frame also has a number of M8 tapped holes for mounting subplates and other spoilboards to the bed if not using the vacuum system. We’re still getting the hang of using the vacuum table, but so far have found that it works best when the work is directly on top of the bed (and not being vacuumed through a fixture). Stay tuned for some vacuum workholding tips and tricks in our upcoming NYC CNC video on the 24R.

The 24R comes standard with a 1.5kW (~2HP) watercooled spindle capable of 10-24,000 RPM. The chiller comes included, and this spindle means that the machine can be powered by a standard 120V outlet making it all the more accessible to hobbyists that may not have a 220V outlet in their house or garage. Disclaimer: the vacuum system does require 220V. Since the router runs on Tormach’s own PathPilot control, probing and using a tool setter are intuitive and make using the 24R that much easier.

Overall the 24R seems to be a solid machine, but it does have just a few quirks. The first, and most glaring point on the list is the lack of an ATC or quick-change tooling system. Adding a tool touch probe to the machine (one shipped with our machine) remedies this issue to an extent, but manually changing the tool (and often ER20 collet as well) each time can be tedious. Fear not: companies such as Mechatron create ATC solutions specifically for this style spindle, and rumor has it Tormach is working on their own ATC for the 24R. Our router appears to have an extra air line run just for this purpose and has mounting locations at the Y+ side of the router bed that could be for a toolholder rack.

One final thing to keep in mind is the lack of enclosure on the 24R. If you’re looking for a quiet or clean machine, this isn’t it. Granted this is true of almost any router, so we aren’t picking on the 24R in particular – just be prepared to sweep up some chips when you’re done. We learned this when we were so pleased with how well the machine was cutting aluminum that we failed to realize what a mess it was making on the shop floor.

From the time we’ve spent with it, Tormach’s 24R is a capable router with a large work envelope, rigid frame, and intuitive control. The vacuum workholding system is a plus for those working with large sheets of materials (we’re still testing best practices for holding smaller parts), and the linear rails are a welcome change.

Where the 24R shines is in the cut – but the lack of some quick-change tooling system hinders the workflow between cuts. The addition of a quick-change system or even ATC would make the 24R stand out in its class, and is an addition we’re looking forward to. Especially with the larger work envelope, we think Tormach’s new router will pick up where the DATRON left off just fine.

What Is CAD, CAM and G-Code?

Save Cash on Machine Tools with Section 179

Save time with this Tormach 1100M CNC mill workholding hack
Get Started Even Faster with Machine Assembly & On-Site Services
Should you upgrade the servos on your Tormach CNC mill?
Making Off-Road Equipment with Tormach’s 1300PL Plasma Table
The Ins and Outs of Threadmilling