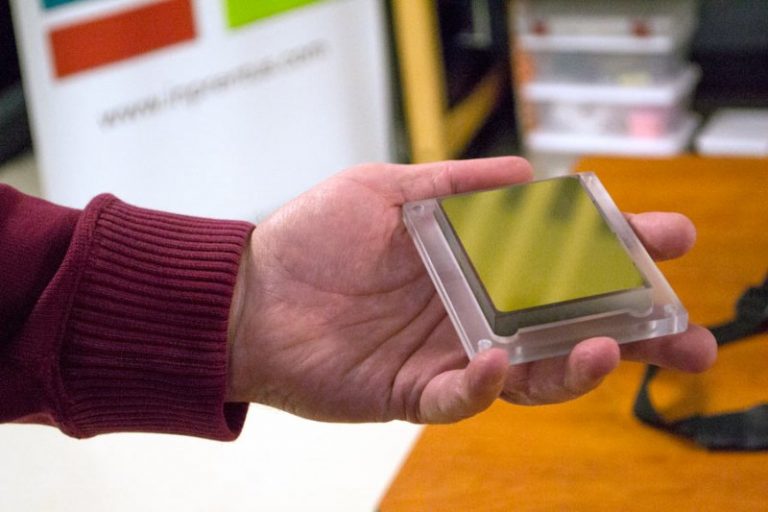 Scientists don’t fully understand how superconducting materials work, but if we did, their potential could be harnessed in saving energy. Peter Abbamonte, chief scientific officer at Inprentus (Champaign, IL), explains that, “30% of the power consumed in the United States every year just goes to heat up the grid.”

Abbamonte founded Inprentus while he was working to build a $3.8M beamline at Argonne National Lab to study superconducting using x-ray scattering experiments. The light that comes off of a beamline is “white light,” meaning it contains all colors in the spectrum.

Today, Inprentus has developed several techniques for manufacturing diffraction gratings. The diffraction gratings that Inprentus makes are sophisticated scientific instruments that cost between $60k and $80k a piece. They are produced on an incredibly precise machine that precisely places hundreds of thousands of tiny lines in a gold film for x-ray optics. But, like many things in manufacturing, one of the biggest challenges is workholding. That’s where the company’s PCNC 770 comes in.

Inprentus’ Tormach PCNC 770 has been important to improving their prototyping and development process, according to Jonathan Manton, VP of Engineering.  It is often used to modify and customize plates and workholdings that are purchased from laboratory suppliers.

“Rather than getting a custom plate made or waiting several days for a machine shop to put some holes in a plate for us, we can cut it on our Tormach in ten minutes,” says Manton. Because Inprentus is heavy into research and development, the faster they can iterate on various prototypes, the better.

“If it weren’t for [Tormach], we probably would have just developed slower,” explains Abbamonte.

“We wanted to buy something that just worked,” explains Manton. “We didn’t need another project.”

The company currently has one service for fabricating optics, with clients like Argonne National Laboratory and Brookhaven National Laboratory, and they are in the process of developing a second machine, which is about 30% complete.

“[The second setup] is pushing up the resolving power and improving control over the line shape,” explains Abbamonte. “We’re constantly reinventing the instrument. We’re always tearing the thing apart, making new parts, and putting it back together.”

“If we need to tear apart a prototype down and set it up differently the next day, we can’t wait a month to send it off to a machine shop,” he continues. “We needed something that worked, that was fast, didn’t cost an arm and a leg, and wasn’t over-engineered. And that’s how we found Tormach.”

This Spring, Robots Are Everywhere at Tormach